Creatine, a compound produced by the body and found naturally in a variety of foods (especially red meat that is cut from close to the bone) is amongst the best supplements – if not the best – for improving athletic performance. This is the use to which it is most commonly put – athletes of all stripes take creatine supplements to enhance their athletic ability and output, increase their strength, and reduce muscle damage/improve muscular recovery post-training.

Though commonly used as part of a ‘bulk’ by athletes wanting to gain muscle mass and/or strength, creatine is useful in a cut, too. All of the aspects it improves tend to suffer quite badly during any calorie deficit, making it a must in your dietary planning whether bulking or cutting.

Most creatine supplements are made from creatine monohydrate, which consists of a creatine molecule paired with a water molecule (hence ‘mono’, meaning singular, and ‘hydrate’). This is by far the best researched and easily available kind. However, there are others, all of which combine creatine with other compounds intended to increase absorption or boost performance – these include compounds such as citric acid, magnesium, hydrochloride, malic acid, and many others.

However, not all creatine is made equal (though most of it will do a good enough job if pure enough). We’ve rounded up some of the best creatine supplements available in the UK – buy any from this list and you can rest assured that you are getting exactly what your body needs.

What To Look For When Buying Creatine

There are a few things to look for when buying creatine supplements. Do note that most are quite similar. As with whey protein, the base ingredient shouldn’t see much variability, as long as it’s pure. If something is giving you x amount of creatine monohydrate to a 90% + purity, you’re onto something good.

However, there are a few ways of sorting between what is quite frankly a dizzying array of options.

You will want your supplements to be free from artificial flavours, sweeteners, colours, and fillers whenever and wherever possible. This is true of all supplements and foods more generally.

Then there are the add-ons. Plenty of supplements will have additions to boost your athleticism, such as electrolytes, added carbs or protein for improved uptake and retention, BCAAs, and so on. Try to pick something that you think will genuinely add to your diet – if you sweat a lot, for instance, added electrolytes will be a great idea.

Then there is the dosing. One scoop should give you all you need for the day. If it doesn’t, you’re probably getting filler in there.

Most supplement companies recommend that you follow a ‘loading phase’, during which you take in 20-25 g per day for a week or two. This is silly. Of course they suggest this – they’re trying to sell you as much creatine as possible. You don’t need it, however. Just stay consistent – a few months into taking creatine, you will not see any benefit from that initial loading phase.

Creatine In The UK: Our Top 5 Picks 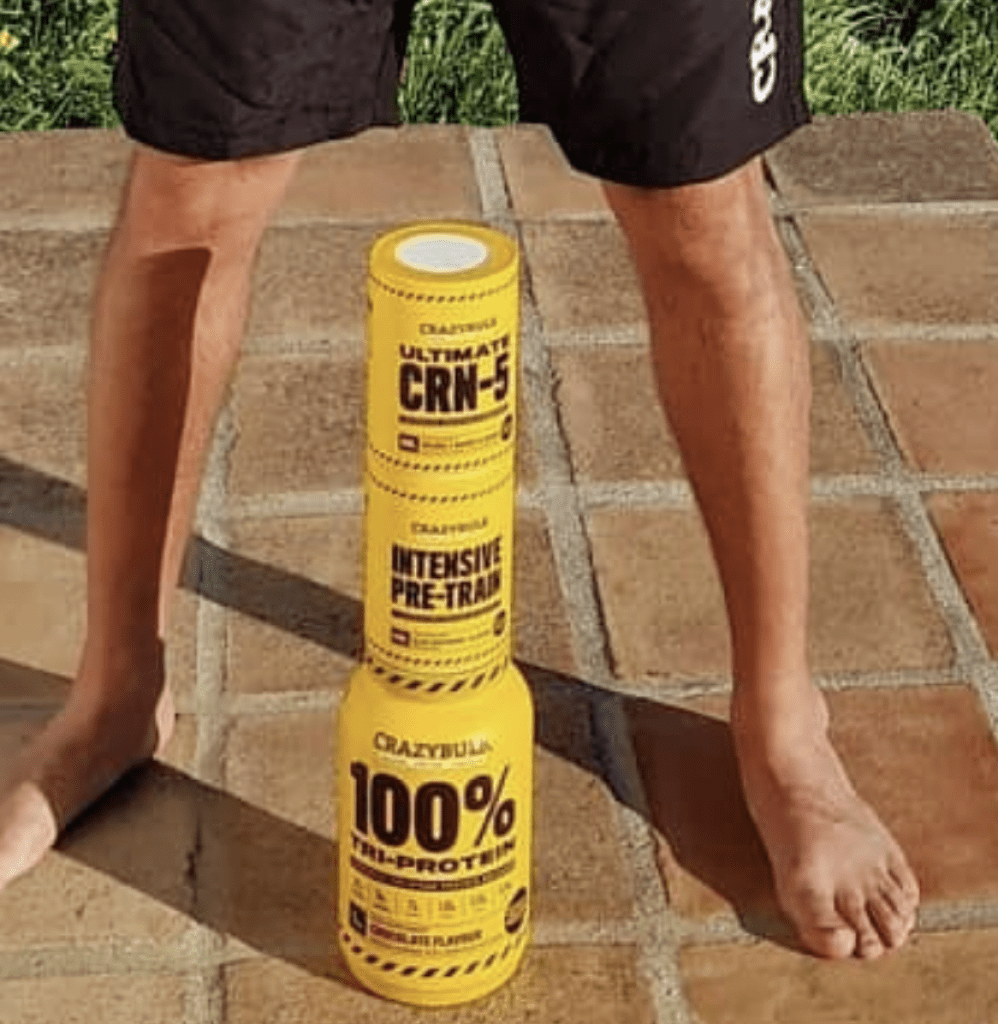 CRN-5 is so called because, as far as I can make out, it’s the only creatine formula for daily use that uses five different types of creatine with added electrolytes. This leads to optimal hydration and uptake into the muscles.

It’s all very clever. Combined, these five types of creatine greatly enhance ATP capacity, giving you far more muscular power and energy. It really will translate into more weight lifted in the gym, more power laid down in an athletic setting, faster recovery, and greater adaptation.

It’s quite easy to build a tolerance to any one type of creatine. Realistically, this isn’t such a big deal. However, if you can get around it, so much the better. The five creatines involved in CRN-5’s formula should make it harder for your body to build this tolerance, giving you lasting results for much longer.

Without doubt, CRN-5 is our top buy when it comes to creatine supplementation. I love MyProtein. They were the first company to bring low-cost, middle to higher quality whey protein to the market, making it available for pretty much anyone, on any budget. I will forever salute them for this – no more spending fifty quid on a tub that you’ll get through in a week or two.

Their creatine is decent, too, following the same pattern of decent quality at affordable prices.

It’s a fairly typical creatine monohydrate, though they rightly claim that it’s one of the most highly researched forms of creatine powders in the world (this is really saying something, as creatine is so heavily researched so generally). It’s free from anything nasty, giving you simple, unflavoured, undoctored powder to boost athletic output and recovery.

They don’t stop here, however. They offer more than just their basic monohydrate powder. They offer creatine monohydrate tablets, which are great to keep in your gym bag so you’re always ready. They also offer a highly researched Creapure® Creatine which are great-tasting tablets with 99.99% creatine content (more on this below), and their pre-workout, laced with caffeine (a particular favourite of mine). 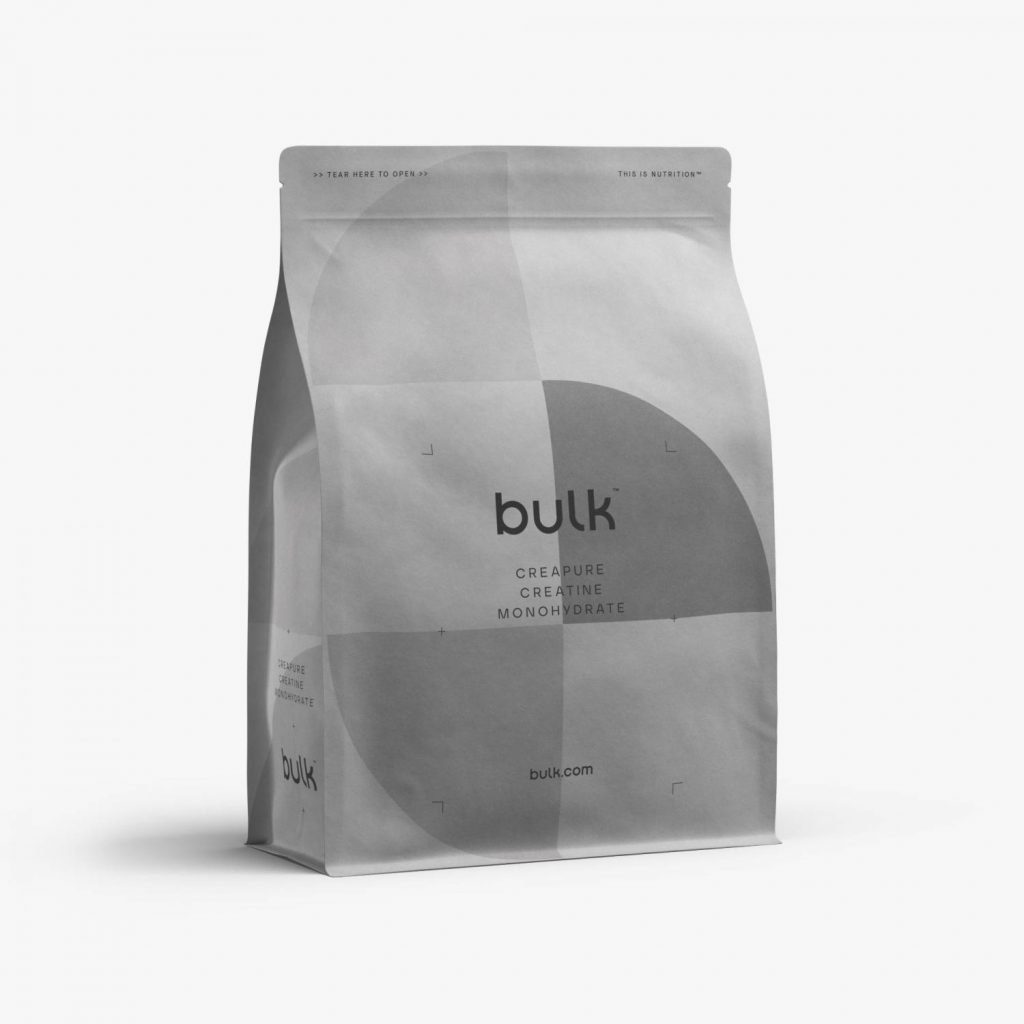 Creapure (with a fancy ‘®’) is an incredibly pure form of creatine monohydrate (hence the name) produced by AlzChem Trostberg GmbH in Germany.

It is very high-quality, as you might imagine, and is exclusively produced at their specially designed production facility in Trostberg (German engineering all day!) It is one of the more widely studied forms of creatine – they, too, claim that theirs is in fact the most widely studied. This is a recurring theme with creatine manufacturers. However, whether or not they are the most studied, they are at least incredibly well studied, which is obviously comforting.

You can be sure that you’re getting some of the best stuff on the market.

Creapure is vegan and exclusively manufactured by chemical synthesis. As above, those following plant based, meat free diets are the most in need of creatine supplementation, so this is fantastic. None of their raw materials or ingredients are derived from animal products.

Production is also IFS FOOD certified, a quality standard recognised by the “Global Food Safety Initiative”, and is entirely Kosher and Halal. 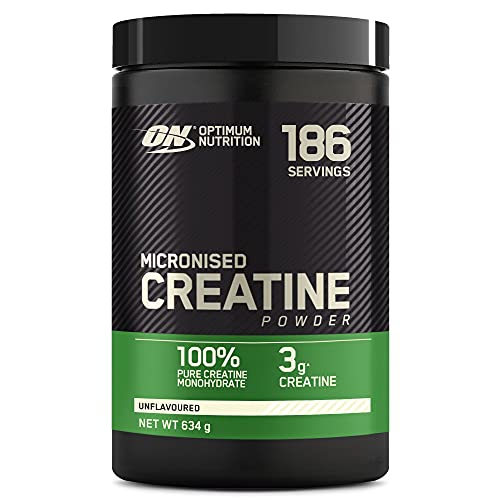 You get 3.4 g of micronised creatine powder with each scoop of Optimum Nutrition’s Creatine, designed to fully aid in explosive energy and athletic recovery. Micronised powder is generally easier to process and digest. This isn’t too big a deal for most people. However, for those who struggle with any kind of gastric issues, particularly with other types of creatine, this can be a real boon.

ON’s creatine is also entirely flavourless and odourless, meaning you can mix it in where you like, how you like, with your protein shakes or other supplements. It is pure, with no added nasties, no sugar, no calories – it really is just simple creatine, which is fantastic.

It mixes particularly well, in fact. There are no lumps or clumps, such as you may find with other brands, and it is actually tasteless, rather than being kind of… taste free? Or indefinable? 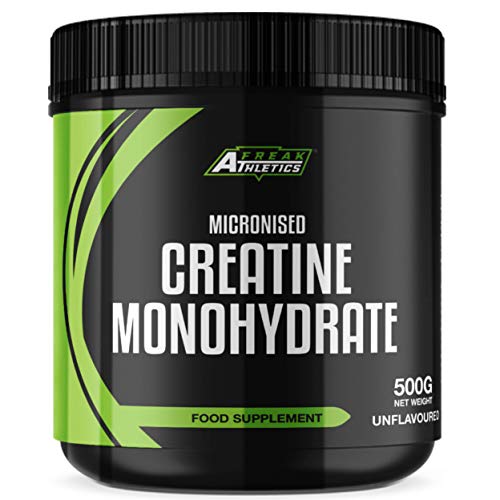 Finally, we have Freak Athletics’ creatine.

Freak Athletics are well-known for priding themselves on only using the highest quality supplements available on the market. Everything they make enjoys this level of care and quality. Their creatine is no exception – it’s first rate, delivering 3.5 g of high quality creatine monohydrate per serving.

It is pure, as Freak always strive to manage, is made in the UK under very strict, stringent conditions, and comes entirely unadulterated. It is fully unflavoured – and genuinely so, much like Optimum Nutrition’s – so you can mix it with whatever you like, even pure water, without it changing the flavour. It mixes well, giving a lovely, smooth finish with no chunks floating in it.

There are two stand out options here, for me.

For sheer quality and purity, I would go with Creapure. You will struggle to find a better simple creatine monohydrate.

However, I would personally go with CRN-5. I sweat quite a lot when I train, and therefore often include electrolytes in my pre- or post- workout shake anyway. Getting this in alongside my creatine just makes sense. The combination of five different, highly potent creatine strands helps, too – in this case, variety really is a good thing.

Creatine is a compound found naturally in muscle cells. It helps your muscles to produce energy, which is needed for contraction and, thus, strength and explosiveness. Those looking to perform high-intensity or high-resistance training such as weightlifting or sprinting will benefit the most from taking it, though all athletes stand to gain something from it.

It will help you to generate more muscular power, thus improving your performance, and ultimately lead to greater athletic progression, with more efficient hypertrophy.

Creatine shares many chemical similarities with amino acids – the base unit of proteins. Endogenously – within the body – it is produced from the amino acids arginine and glycine. Your muscles will store around 95% of your body’s creatine stores. The remainder will be split between your brain, liver, pancreas, and kidneys.

As mentioned above, most dietary creatine comes from meat. Those who eat high amounts of meat will therefore have naturally higher creatine levels in their bodies. Red meat, especially that cut closer to the bone, will be the richest source. For this reason, those following low meat or meat free diets will need to pay particular attention to their creatine supplementation (I personally follow a vegetarian diet and supplement with around 5-10 g of creatine monohydrate daily, which of course helps me to maintain and build strength and muscle mass).

The simple answer is that creatine gives our muscles more energy and power. Creatine aids in your body’s production of adreno triphosphate (ATP), a high-energy molecule that serves as your muscles’ main energy source. It serves as the key energy source for heavy lifting and high intensity training.

In addition, creatine supplementation can enable you to perform more total work or volume in a single training session, improve cell signalling, which will aid muscle repair and hypertrophy, boost levels of anabolic (muscle building) hormones, increase cell hydration (in fact, people tend to put on a few pounds when they first begin supplementing with creatine as their bodies take on more fluid in a very healthy way), and inhibit atrophy, or muscle breakdown.

Many of us lack optimal amounts for rigorous athletic performance, especially those of us on low meat or meat free diets. Therefore, adding a few grams of creatine per day is a very intuitive way to improve performance.

Requisite intake from supplements can be anything from 1-10 g per day. Most athletes will be OK with anything in the lower range. However, levels will be dependent on factors like your own muscular needs and athletic goals, your current muscle mass, and levels of hormones such as testosterone in your system. As these all tend to be exaggerated in bodybuilders and powerlifters, for example, with a great need for muscle growth and strength, going above 5g would be more appropriate.

Added to wishlistRemoved from wishlist 0

Added to wishlistRemoved from wishlist 0

Added to wishlistRemoved from wishlist 1

Cycling is one of the best forms of exercise going, especially if you can get out and about on an ...

Most of us begin each year full of good intentions. We make new year’s resolutions and hope to ...

Creatine, a compound produced by the body and found naturally in a variety of foods (especially red ...

As an Amazon Associate we earn from qualifying purchases. You will never pay more by clicking our links.
Recent Articles: