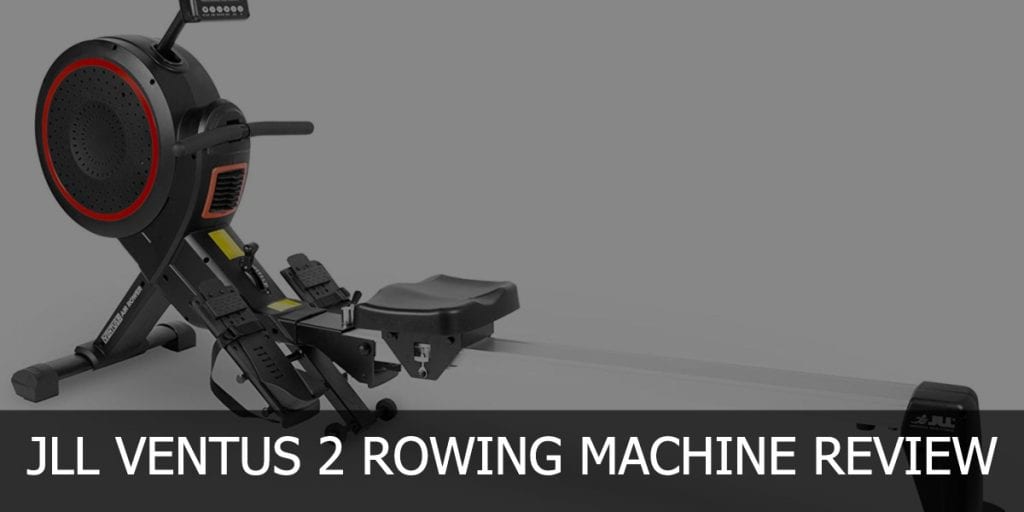 The JLL Ventus 2 rowing machine is a step up from their entry level model and is looking to compete with more premium models such as the Concept 2. Considering this rower is less than half the cost of some of the Concept 2 rowers, to compare the two like for like would perhaps be a little unfair, but we will make a comparison at the end of this review all the same – and you might be surprised at what we have to say.

We have long been admirers of JLL Fitness and they have come a long way since their early days of focusing on budget home fitness equipment. The Ventus 2 is a testament to that, and one gets the impression upon first glance that this is much more than just a budget rower. We are huge fans of rowing as an at-home cardio activity so we took this mid-priced offering for a period of 3 weeks to put it through some thorough testing.

You can see the results of which right here in our full JLL Ventus 2 review. 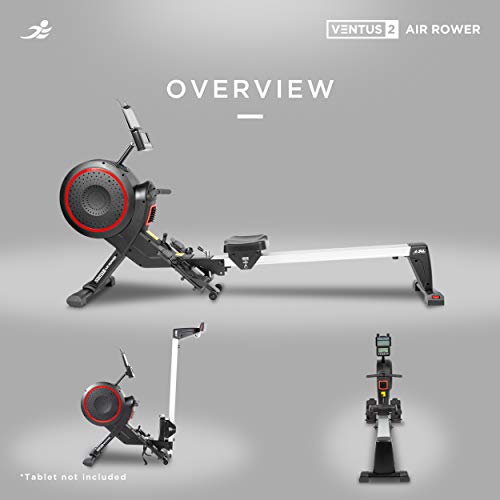 Upon taking delivery of the Ventus 2 your first task is to assemble the machine. This is fairly straight forward and can be completed by one person. The majority of the central unit has already been assembled for you and the heaviest individual part weighs just over 20kg – so for most people, this is a solo task and it takes around 45 minutes.

Once set up you might want to take a minute to survey your new rowing machine. The Ventus 2 looks impressive. It has a bold centre console that sits at just above eye-line and a large resistance wheel that dominates the overall design of this unit. It looks impressive and of course it folds up to make storage less intrusive on your home environment.

The Ventus 2 measures up at 214cm (l) x 54cm (w) x 115cm (h) when in use and has a total weight of just under 35kg. The maximum user weight is an impressive 120kg which is only 15kg less than the more expensive Concept 2. One of the most unique elements of the JLL model is that it has a dual method of resistance with magnetic and air resistance technology used. This is pretty uncommon in rowing machines but it is something that we found to be pretty useful. It is worth pointing out that air resistance rowers tend to have a limitless upper level of resistance and as such they are ideal for all levels of users – up to the most advanced. We cover more on this in the next section.

The JLL Ventus 2 rower features a belt driven system as opposed to a chain driven system and this provides a very smooth action indeed. To add to the smoothness of each stroke, there is a well made rail with two rollers to the top and one to the bottom which ensures a fluid movement on each and every stroke.

There are 8 levels of magnetic resistance to choose from and these are easily selected by using the lever which sits below the central console and is easy to reach unlike some rowing machines.

Everything about the Ventus 2 has an air of quality to it and all touch points are well made and comfortable to the touch. The LCD screen displays all the vital data and there is a tablet holder that sits above it which is ideal for watching something motivational or whatever else you fancy.

We tested the Ventus 2 for 3 weeks and in that time we managed to squeeze in 12 workouts in total, 6 from a 6’2″ male and 6 from a 5’8″ female. Both users felt that the Ventus 2 was adequately sized for them and found it comfortable to use. Both of our users had used lots of different types of rowing machines – some designed for home use and some designed for commercial gym use.

The Ventus 2 by JLL was impressive in almost all areas and considering it’s price point it over-achieved compared to our expectations.

One area of concern that we had prior to testing was the length of the rowing machine. Measuring at just 214cm compared to the Concept 2 which measures 244cm in length we were concerned that taller users might find the stroke length too restrictive. This was a fear that was quickly eradicated once we got in to testing. Unless you are over 6’4″ we would suggest that this rower will be perfectly suitable, and there is no lower limit that should cause issues the other way either. 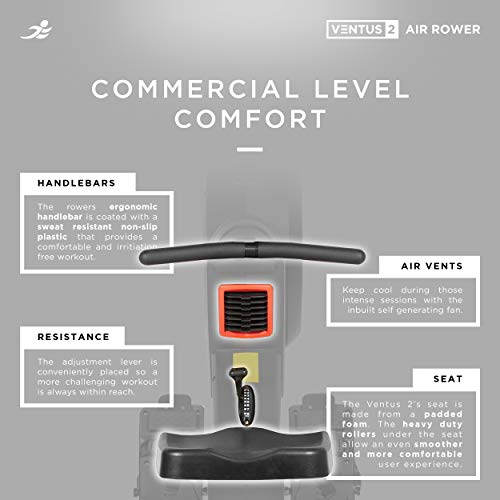 In fact, it is fair to say that our testers found the Ventus 2 to provide an incredibly smooth stroke and both commented on the comfortable padded seat and the well made handle bars. Another point that we would like to make very clear is how sturdy the frame of the Ventus 2 is – especially when compared to other home use models. There are actually three touch points between the upper frame and the floor – with the usual front and back legs and then an additional middle set of legs providing extra stability. This means you get a really secure feeling even when rowing even with a really high intensity.

The combined air and magnetic resistance is a pretty impressive feature of the Ventus 2. It allows beginner users to really start off with minimal resistance and more experienced users to have a higher starting point through the magnetic resistance options. It doesn’t end there though, as the air resistance provides increased resistance the harder you row. This means that there is pretty much no limit on how much resistance can be achieved with this rower and although it is not quite the same feeling as a standard air rower it is a different feel that our users liked and soon got used to.

There is an air flow vent to the front of the unit which means the faster you row the more air it pumps out at you which is very welcome when you are 15-20 minutes in to a high intensity cardio workout.

The LCD screen is well positioned (it is a little higher than most rowers) and although it is basic in its design it functions perfectly. It just requires a couple of batteries to power it so there is no need for a plug with this rower. All the usual data is displayed including time, distance, strokes per minute, calories and heart rate. If you want to track your heart rate and have this displayed the console will do this with a compatible heart rate strap.

The Ventus 2 is an impressive rowing machine considering the low-ish price and it is an ideal companion for at home workouts. Like most rowers, you will find strength and muscle building benefits as well as having one of the most efficient cardio workouts possible and the convenience of this machine makes it an ideal pick. Transport wheels mean it can easily be moved away from a stored position in to a more central location in the room and the folding mechanism is really simple to use and allows you to easily store it without taking up a tonne of space.

The JLL Ventus 2 Air Rowing Machine is a top choice when it comes to at home cardio workouts. It is not only affordable, but it comes in at less than half the price of more premium models (such as the Concept 2) and gives them a real run for their money in terms of usability and comfort.

The dual resistance mechanism that seemed like a gimmick actually works really well and it has to be said that it is genuinely not easy to find another rower at this price point that offers everything that the Ventus 2 does – and it does it all so well.