Resident PT James Dixon takes a look at this top end treadmill in his NordicTrack EXP7i review. Find out how it stacks up below… 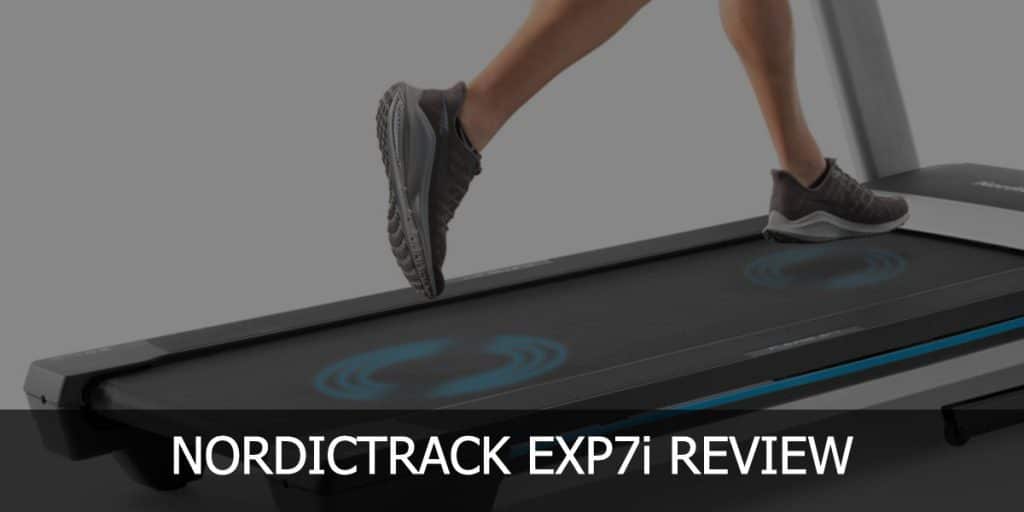 We all need to put some time into cardiovascular training of some kind. This can be running, cycling, rowing, HIIT, aerobics, or even simple walking. Either way, hitting around half an hour per day (less for more intense forms of training) can give us all the many, profound health benefits to be gained from living an active lifestyle.

I would push anybody towards treadmill training if it’s accessible to them. It’s convenient, comfortable, incredibly easy to scale to any fitness level, from complete beginners to seasoned athletes, and you can perform a variety of training styles with one.

For instance, you can get that half hour walk in whilst catching up on emails or watching TV. You can go for a couple of long runs each week whilst keeping yourself safe with a controlled environment and great shock absorption. You can run a HIIT or sprint training workout a couple of times per week, ramping up your overall metabolic rate with a decent afterburn as you hit the 85%+ heart rate range.

All this whilst building up your lower body strength and expanding your heart and lung capacity.

This is where a decent at-home treadmill with decent training programmes can come into its own.

I like to watch a couple of companies, and a couple of ranges within each. NordicTrack are one of them, offering plenty of really high quality treadmills across a range of budgets, from a couple of hundred pounds to several grand. Their EXP range is fantastic – I recently had the pleasure of reviewing their EXP10i, which I found to be terrific (see more on this below).

However, today I want to talk about the NordicTrack EXP7i, a mid-range product that does everything you need it to and more. In keeping with the rest of the EXP range, the EXP7i is one of the best at-home treadmills I’ve used recently.

First Impressions Of The NordicTrack EXP7i

The EXP range in general leave a little to be desired in the aesthetic department. The EXP10i was very bland and chunky. The EXP7i is no better. It’s smart enough, but there are definitely prettier, more elegant treadmills out there – there are some much prettier options from NordicTrack themselves, even.

Forget looks, though. They don’t mean much, especially when stacked up against usability, liveability, and quality of training on offer. The EXP range deliver on all fronts, and then some – they are superb machines.

Looking at the specs, build, and overall quality of the EXP7i, I expected no less – it seems like a fantastic piece of home gym equipment.

It also comes with iFit, which generally means you’re onto a winner.

This is where NordicTrack come into their own – they pack even their most modest machines with a great range of soft- and hard- ware.

The EXP7i isn’t one of their most modest models. Far from it.

The touchscreen is hit and miss. It’s incredibly intuitive to use, very responsive, does everything you want it to do, and has gorgeous graphics. At 7”, however, it’s a little on the small side. 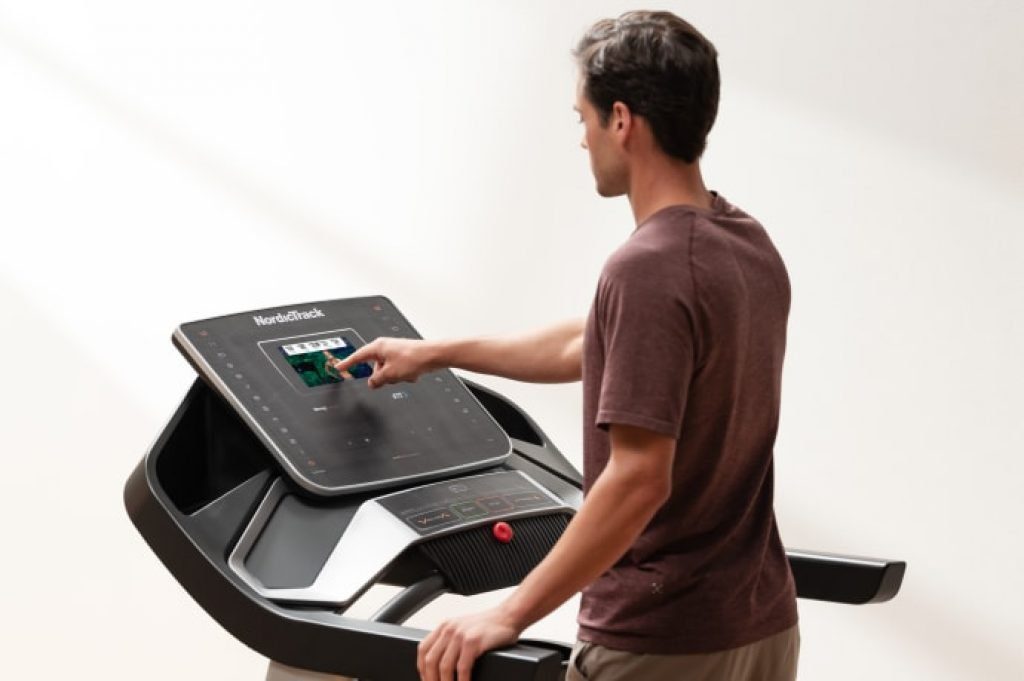 This being said, it more than suffices. It gives you all the training data you could possibly want, showing you all the usual suspects – calories burned, distance travelled, time spent training, pace, and so forth. It also allows you to access iFit, which is the real prize, here. The EXP7i comes fully iFit compatible, with 30 days family membership included (after which you’ll have to pay around 30 quid a month).

This seven inches, compared to the EXP10i’s ten inches (hence their respective names) also saves you several hundred pounds, which boils down to a bit of a bargain.

Alongside the touchscreen, the EXP7i comes with full Bluetooth® audio capabilities, a pair of 2” digitally amplified speakers, and automatic training control.

The frame itself is built for comfort, as are all the EXP models. For instance, you get FlexSelect™ Cushioning to keep your joints safe, taking much of the pressure of running out of your ankles, knees, and hips. You also get a 51cm x 152cm belt, which should suffice for even the longest of strides, and an AutoBreeze™ Workout Fan to keep you cooler for longer. The benefits of these will all spill over into your performance, too, allowing you to train harder for longer.

As with its big brother, the EXP10i, the EXP7i can go up to a 12% incline. Whilst this is breaking no records, it’s as much as most people will ever need. Your thighs will know all about it as you run full tilt up a 12% hill. This is backed up by a 3.0CHP motor capable of taking you anywhere between 0-22kph – more than enough power for anyone.

The EXP7i is well-engineered in other ways, too. 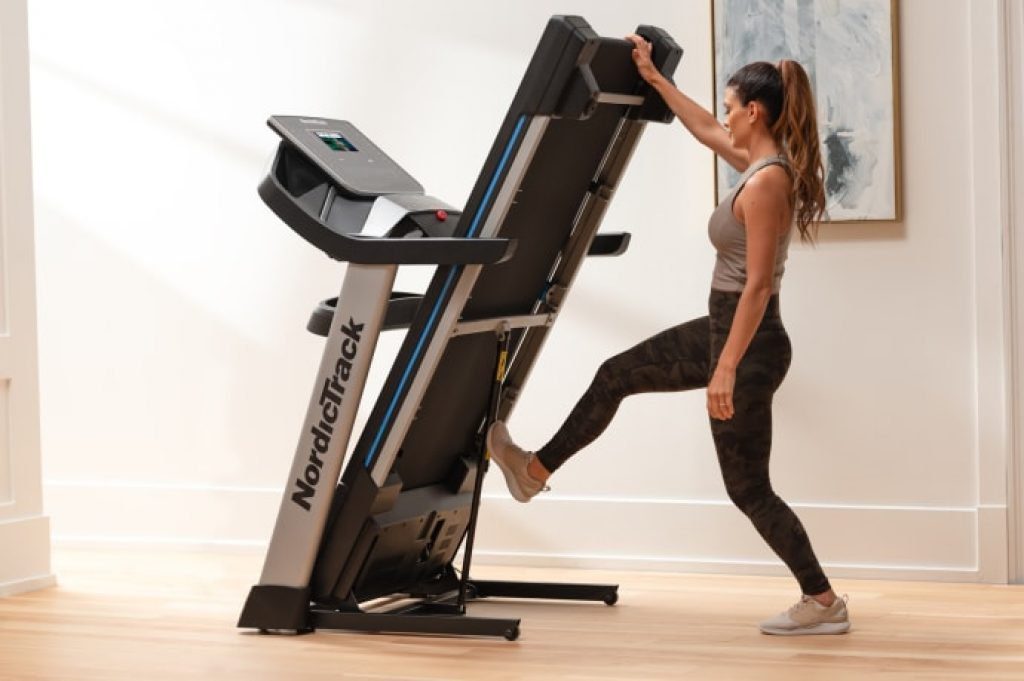 For instance, you get the same smart-response drive system, and the same 1.9” precision and balanced non-flew rollers, as with the EXP10i. You also get the full convenience of a model built with SpaceSaver® Design with EasyLift™ Assist.

The whole thing can take a top user weight of 136kg, which should suffice for most athletes. It weighs 100kg in the box, which would be ridiculous if not for the SpaceSaver® Design and EasyLift™ Assist, and stands at 180L x 99W x 151H cm.

You get a lifetime frame warranty with the EXP7i, alongside a 10-year motor warranty and 2 years on parts and labour.

Apart from the smaller screen, the EXP7i handles much the same as its big brother.

Where the EXP10i gives you a fantastic incline, at 12%, the EXP7i matches it. Though some machines will go higher, they are few and far between, and anything more is largely superfluous for most athletes. 12% should be plenty for most people – it certainly was when I tried it out, especially with the ability to run at around 22kph! I managed to get myself into the 85%+ heart rate range easily enough, which is where the true metabolic magic happens. 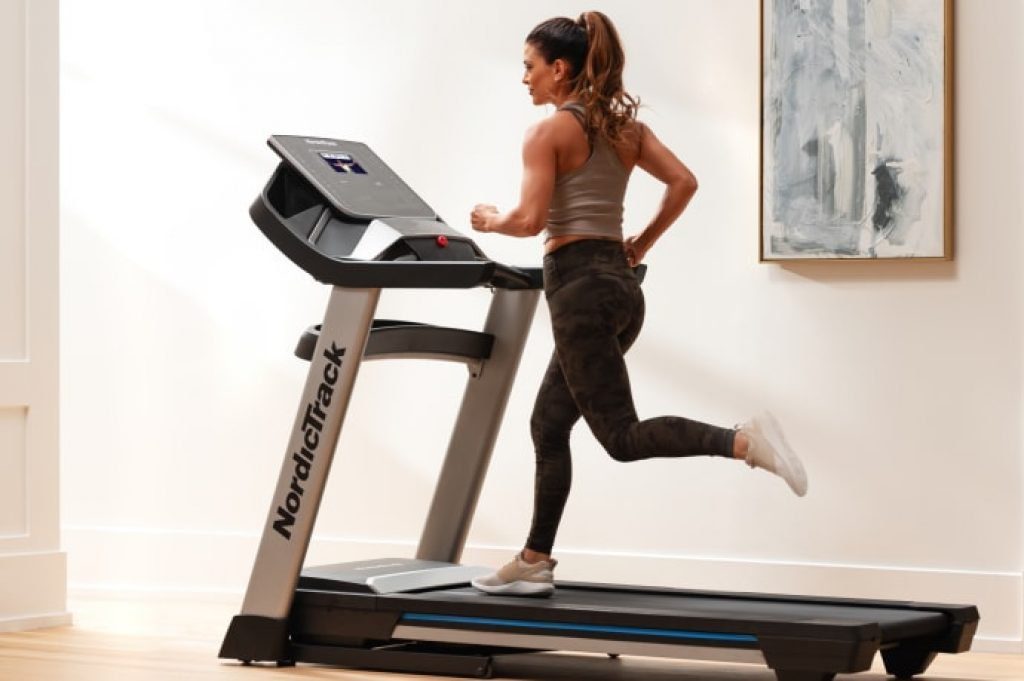 Then there is the iFit capability inherent to most, if not all, NordicTrack machines. It’s one of my favourite features in any cardio machine, and one of the best e-trainers I’ve ever come across (move over Peloton).

Though just getting a single month’s membership is perhaps a little stingy, you will still be getting what amounts to personal training for the sake of around 30 quid per month. As a PT, I would typically charge more than this per hour, so it’s actually kind of a bargain.

You get thousands of hours of on-demand and in-person, live training, across all forms you can imagine – steady state, trail, FARTLEK, HIIT, hill running, to name but a few. It’s enjoyable, taxing, and engaging, more than enough to allow you to always find something new to train. These will all also be very safe and comfortable, thanks to the great cushioning and shock-absorption built into the EXP7i. You’ll feel like you’re floating along even as you chew up the miles.

At home cardio machines also have to serve a crucial function – they need to be viable to live with, at home, where it counts! A noisy beast squatted permanently in a corner will make everyone’s life miserable. You’ll be self-conscious using it, and it will eat into precious floorspace. 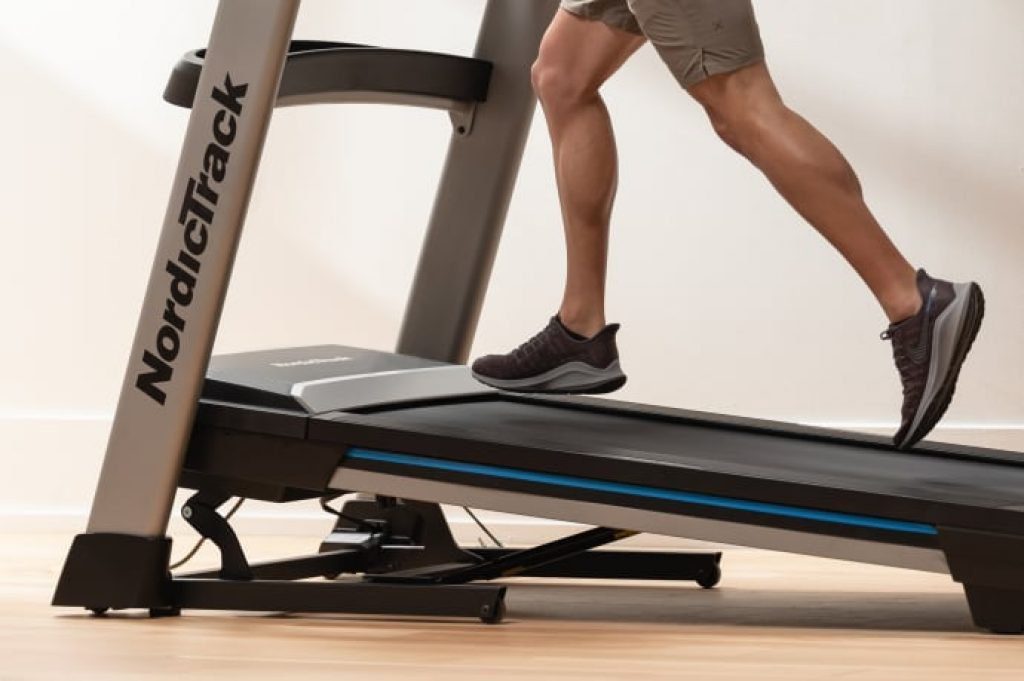 The EXP7i isn’t a small model. As above, it’s chunky and heavy. However, its SpaceSaver® Design and EasyLift™ Assist negate this. You’ll be able to move and store it far more easily than you should for a machine this big. The motor is also quiet, and the shock absorption serves to make your tread quieter as well as safer and more comfortable. It really is as unobtrusive as a massive treadmill can be.

It’s both a pleasure to train with and to live with.

I’ve mentioned it a bunch of times, so it’s only fair that I give the EXP10i a fair shout. It’s higher up in the EXP range than the EXP7i, which means that everything is done fairly similarly, just a little better.

You pay for the extra, of course. The EXP10i will set you back a couple more hundred pounds. However, this can be worth it for a great many people.

Obviously, if you have the budget to spare, the EXP10i can be a great investment. If you can afford the best, go for the best. Why settle for less?

Then there are the extras you get. The design and build are a little better. The tread is a little more cushioned. These differences aren’t too marked, but they are there.

The main thing is the screen. At 10 inches, rather than 7, visibility is better. If you need a larger screen that is easier to navigate and focus upon, the money is well worth spending. For instance, if you’re short sighted, those three inches can make all the difference. I am, and I felt it. I’m not usually a sucker for big screens or gadgets, but the EXP10i was definitely easier to work with without contact lenses or glasses.

Other than this, think of the EXP10i as a slightly improved version of the EXP7i – you get everything the same, just a little bit better, for a little bit more money.

I love the whole EXP range. NordicTrack have put some stellar work in, here. Their design team have left something to be desired with the aesthetics at play, but everything else is superlative. I would personally choose something like the EXP7i. It represents too good a level of value to pass up. However, if you do want to take things up a notch, the higher-class models are there.

It’s your choice. Either way, you likely won’t be disappointed.