There may have been a revolution of late when it comes to home spin classes with a certain well marketed brand seemingly leading the way, but NordicTrack have responded with their latest and greatest indoor studio cycle in the form of the much praised NordicTrack S22i.

Introduced as a direct competitor to the previously mentioned competitor brand (we are talking about Peloton of course) the S22i is very much NordicTrack’s play at coining this ever growing market – and if 2020 taught us anything, it was that having a quality home workout option is really worth while.

The S22i is playing in the same ballpark when it comes to price as Peloton so we wanted to find out how it stacked up – and although this isn’t going to be a direct comparison we will make some references to its main competitor throughout this NordicTrack S22i review.

We spent one month testing out the S22i and for the most part it was heaps of fun… but read on to find out whether it is worthwhile your investment.

The S22i is one of the most impressive studio cycles you will have ever laid your eyes upon. The bike itself looks great with its premium moulded plastics, commercial steel construction and well cushioned touch points but it is of course the attention grabbing 22 inch wide screen monitor that dominates most first impressions – and second and third impressions for that matter.

It would be unfair to say that the S22i is all about its touch screen monitor and the iFit software that powers it – as there is so much more to this spin bike than just the display and its functionality – but it really is one of the key selling points and it looks simply gorgeous.

In all honesty, the S22i looks impressive from all angles, and the design of this studio cycle has been well thought out and seemingly only the highest quality components used. The saddle looks and feels firm but comfortable, the handily located adjustable fan is ideally positioned beneath the large display and there is even an area for a pair 3lb dumbbells to add extra resistance to your training should you need it.

The bike looks and feels absolutely solid and you won’t be worried about giving your all to your workout in fear of becoming unstable – this is as solid as it gets.

The S22i is made from commercial grade quality steel and measures up at 140cm (l) x 55cm (w) x 146cm (h). This premium build quality means there is a maximum user weight of 150kg which is around the standard at this price point but is significantly stronger than cheaper spin bikes. The size means that it won’t dominate a room but at the same time you will notice it – it’s hardly a shrinking violet thanks to its bold looks and we wouldn’t have it any other way. 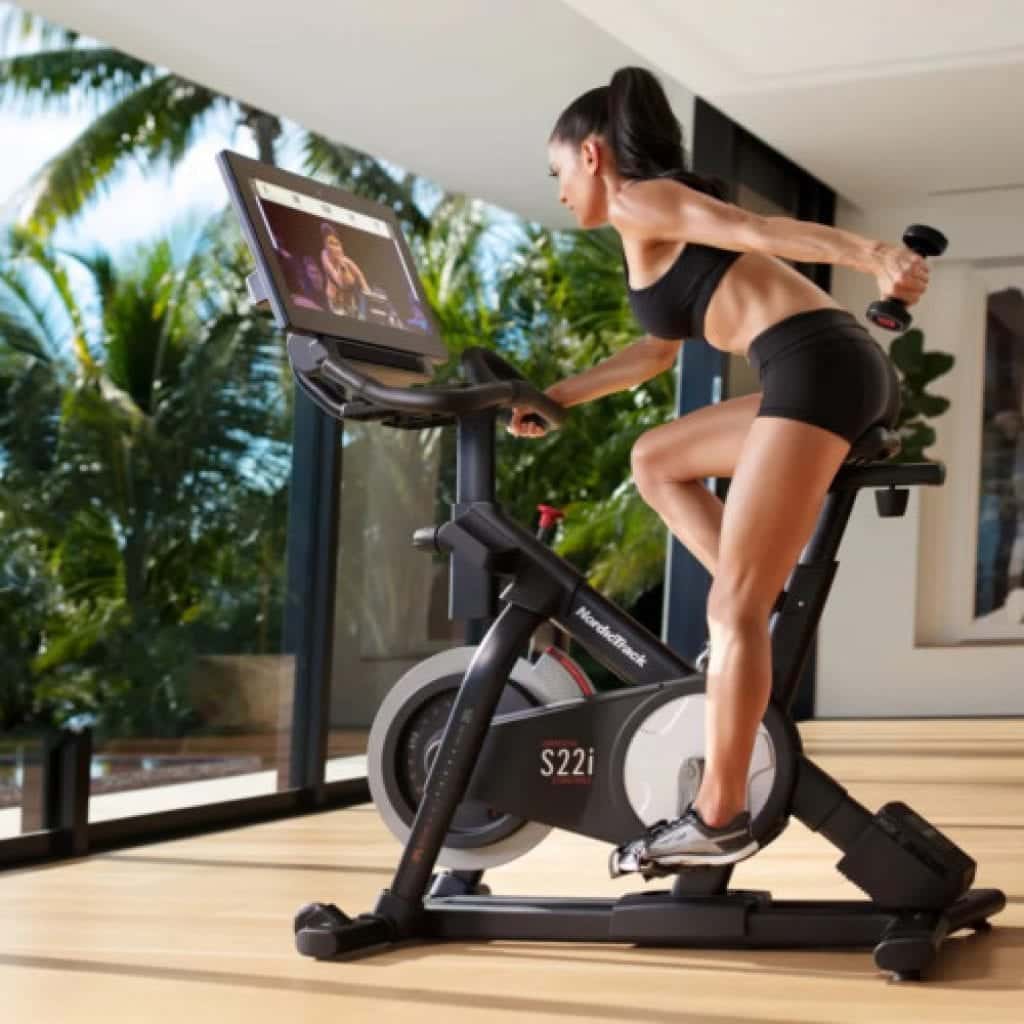 The specs of the S22i are pretty impressive but perhaps the least impressive is the flywheel. At just 14.5kg the inertia enhanced flywheel is not the heaviest but then the weight of the flywheel is perhaps not the best judge of its quality and more so its feel during operation is perhaps a better metric to judge it by – and on the usability front it excels. There are 24 levels of electronically controlled magnetic resistance and the range of resistance is huge – meaning that whether you are a complete novice or a seasoned veteran, this bike will be both accessible and challenging.

There is one killer feature that completely sets this indoor studio cycle apart from the competition and that is its ability to provide an incline and a decline! The S22i can provide the user with a 10% decline and up to a 20% incline which makes rides so much more fun. This is a feature that doesn’t exist on Peloton and is something that NordicTrack have likely thrown in to to get one over on their main competitor. Although the incline and decline has no actual impact itself in terms of the difficulty of ride (as there is actually no gravity or force impacting the ride) the bike adjusts the resistance when inclines or declines are activated so it creates the feeling you would associate with the incline or decline – clever stuff.

The 22 inch touch screen monitor is a joy to behold and the screen quality is impressive. There are two 2″ digitally amplified speakers built in to the monitor and these perform as well as any speakers we have seen on other bikes. Beneath the monitor is a full width fan that is touch controlled and can be switched off if needed (which we highly doubt anyone ever does). Having the ability to turn the fan up and down is a nice touch though.

The pedals are dual sided with one side featuring a standard flat pedal and the other featuring a foot cage to help with the upward motion when pedalling. We would have liked to have seen some SPD compatible pedals included but these can be switched out by the user if you so wish.

As you might expect, the height and distance that the seat sits at is fully adjustable, as is the handlebar height. Another excellent adjustable feature is the display which can be tilted up and down to achieve the perfect viewing angle and can even be rotated 360 degrees. This means if you want to take part in a workout that doesn’t use the bike or if there are parts of a workout that involve getting off the bike then you can simply move the screen to the desired angle and view it perfectly – see we told the screen was important.

All in all, the S22i is incredibly well spec’d and gives all of its competitors a good run for their money – including Peloton.

Having great specs is one thing but it’s how something performs in the real world that matters – which is why we wanted to take the S22i on a good few test rides over the course of a month before we brought you our full S22i review. We had three different riders testing it and all came back with pretty glowing reports. Crucially, they also reported that it was extremely comfortable which was pleasing as they ranged in height from 5’5″ to 6’3″ and none of them are usually short of a moan.

The bike itself is top quality and aside from the screen and iFit software, if you were just using this as a spin bike and not accessing any of the interactive features then you would be happy. It would be a very expensive spin bike, granted, but it would be one that would likely last for years and years to come and provide a strong workout time after time.

The 24 levels of digital resistance work really well and provide a noticeable difference in challenge at each level. One thing to bear in mind is that the resistance is supposed to be silent and although that is technically true, because it is electronically controlled there is a motor that makes a short noise upon each level change. This lasts for around 1 second and is hardly a deal breaker but it is worth mentioning.

In terms of overall noise level produced, the S22i is actually very quiet in operation. The only real noise comes from the resistance levels changing and the inline/decline changing as this is also mechanically powered. Again, the noise is short lived but for anyone who specifically needs a near silent studio cycle then it is good to know in advance about these noisy motors.

Despite the small amount of noise that comes with the incline change, this is a feature that we really liked. It makes the rides much more interesting and is a feature that Peloton simply doesn’t have. The resistance changes alongside the incline to give the impression of the usual forces that make it easier going downhill and harder travelling uphill – but the real benefit here is when your ride on screen matches the angle of the bike’s ascent or descent. 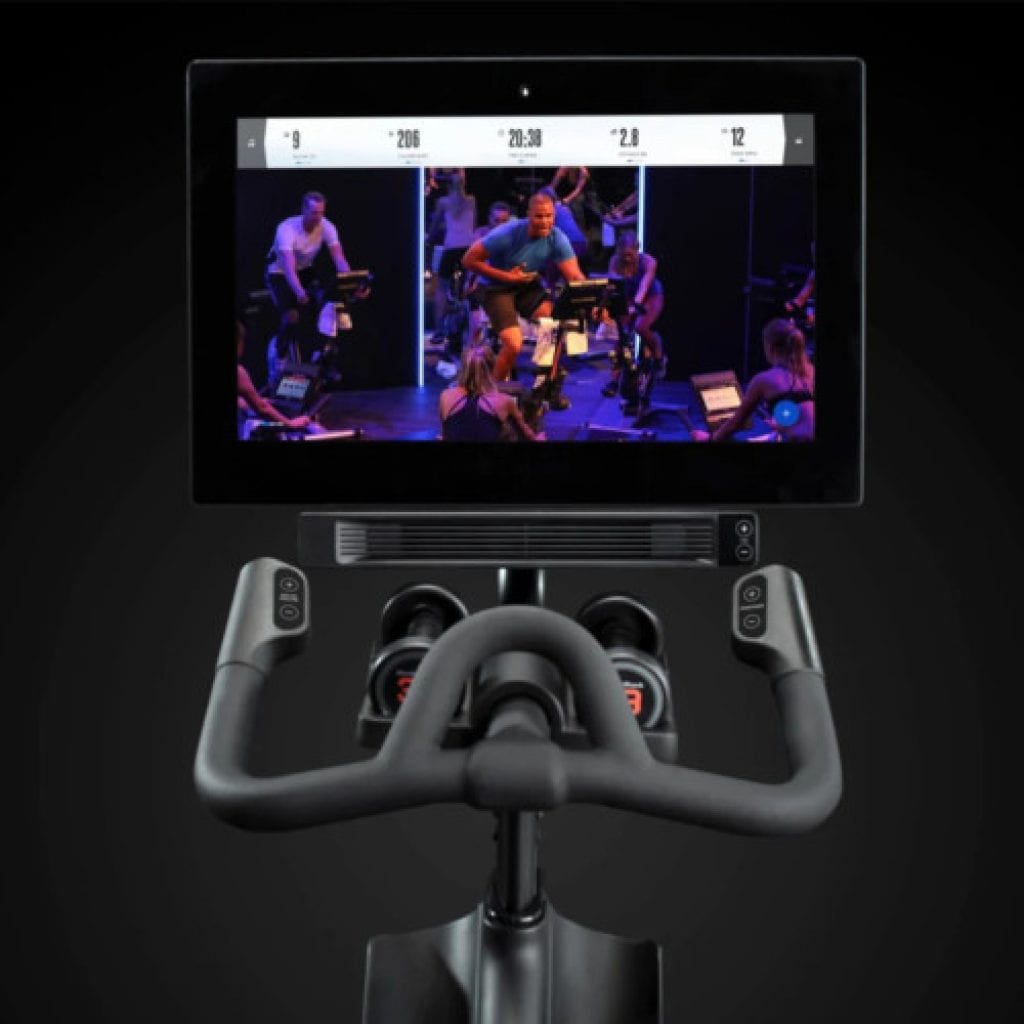 This brings us nicely on to the iFit software and the screen itself. There are two main options when it comes to choosing your rides and that is to go with studio based instructors or pre-recorded real life routes in a range of locations (many of which are pretty exotic). Both of these options are great and manage the resistance and incline settings of the bike automatically. There are even interactive studio sessions where the instructors will change your settings in real time.

The studio sessions are pretty much what you would expect and although these are great there is nothing particularly special about them. Where the S22i really excels (and in our opinion blows Peloton out of the water) is with the cycle routes you can choose. These are so much fun and the way the bike reacts to the hills just adds to the realism and you can loose yourself in each ride.

Of course, you can change the resistance and incline levels manually too using the quick select buttons on the handle bars. The handle bars deserve a mention in their own right as they are ergonomically designed to provide the ideal riding position and they have multiple grip positions. For those who want to stand when really pushing the intensity levels these various grip positions really help and the sweat resistant padding is ideal.

So much of what makes this bike great is based around the display and the screen itself is impressive in its quality but also in its functionality. Moving around the Netflix style grid of workouts is easy as is switching between studio and outdoor rides. If we were being super critical of the screen we would say there is a slight delay between touching the screen and it executing the desired action but this is not a deal breaker as the screen isn’t used a great deal during a ride and its mainly used when setting up your ride.

NordicTrack do rely heavily on iFit as they have done for years, but it is a great system that is growing and improving all the time. There are not quite as many options for live studio sessions as Peloton have but Peloton doesn’t have the outdoor rides and this is the best part of the S22i for us. You get a family membership to iFit included for 12 months when you purchase the S22i and this really is required to get full use out of this spin bike. You can also use the S22i with Google Maps and other third party apps that allow you to literally ride anywhere in the world.

The NordicTrack S22i is perhaps the best indoor studio cycle we have ever used. It’s as if NordicTrack have taken the best bits of all their competitors and blended it in to one ultimate studio cycle. The screen is top quality and can be used for a lot more than just spin workouts.

The decline/incline adjustments that could have appeared gimmicky actually add a load of enjoyment to each ride and the outdoor courses will leave you wanting to come back for more.