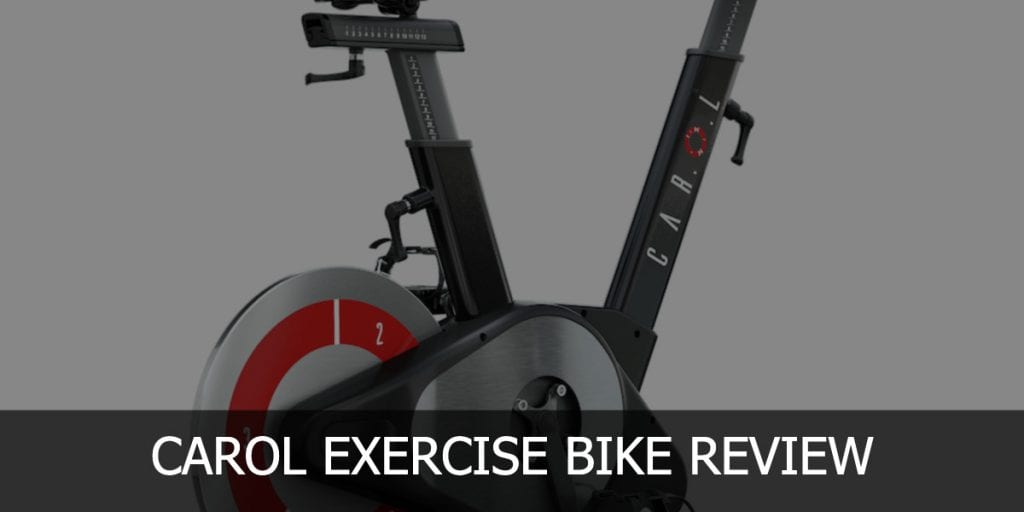 As you are reading this review the chances are you have heard of the Carol Bike and it pits itself against some pretty strong competition in the form of the much more well known Peloton exercise bike. But this AI powered exercise bike promises a very different experience to any other exercise bike we have ever used – and the results and usability aspects were pretty interesting and certainly warrant further inspection.

This Carol Bike review aims to bring you our full and honest assessment of the bike itself, what it was like to use for 4 weeks and how we think it stacks up against the competition.

Whether you think you know all there is to know about the Carol Bike or you are yet to be initiated – the chances are you will learn something from our review.

At first site, the Carol Bike looks and feels much like any other premium spin bike. It is robust, has a high end look and feel to all the main components and has a built in touch screen monitor (in the form of an Android Tablet) that is used as the main display and gives you the AI powered functionality that sets this bike apart from its competition.

So far so good.

Carol is incredibly stable and weighs in at 59kg. Taking delivery was simple for us as our test model came ready assembled. There is an additional cost usually for setup but we can’t imagine the setup would be too difficult. Ours was delivered to our room of choice but we did move it from one room to another and this was easy enough thanks to the handy transport wheels.

We are big fans of the design of the bike, and although that’s not a deal breaker with this kind of tech, it’s still nice to have something that looks great – and the sleek silver, white and red colour tones give it a modern and classy look.

Of course, the Carol Bike is different. On the outside it looks the same, but the software that powers the hardware is where this bike comes in to its own.

For those who like to exercise efficiently the Carol Bike is a dream come true. The whole concept of CAROL is that you can work out at a very high intensity for just 40 seconds and get the same benefits as a 45 minute jog. That may sound too good to be true and it is stretching the reality a little, but the concept is completely sound and is fully research and science backed.

In reality, the 40 seconds of hard work is split in to two 20 second high intensity bursts and all of this is covered within a 9 minute period – however, for all but the two 20 second sprints you are working at a very low intensity with more of a focus on breathing and mindfulness than taking on a hard cardiovascular load. This high intensity and recovery focused approach is completely unique when it comes to exercise bikes and although the science is pretty well established, it is only now that this is possible domestically thanks to the CAROL artificial intelligence software and hardware.

Without a Carol Bike, you would need a dedicated physiologist to track your vital stats in order to provide you with the correct resistance level and to ensure this was done in a safe way but also one that delivers benefits. This ‘minimum effective dose’ method of exercise may not appeal to all users, but for those who are looking to work out for the minimum amount of time but still enjoy serious cardio and overall health gains, this bike is going to hold serious sway.

The Carol Bike measures up at 116cm (l) by 56cm (w) and has a maximum user weight of 130kg. Although it’s not a small bike, its also not the largest and it actually measures up a smidge smaller than the Peloton bike (which is probably its main competitor – only in terms of price point though as they are completely different concepts). 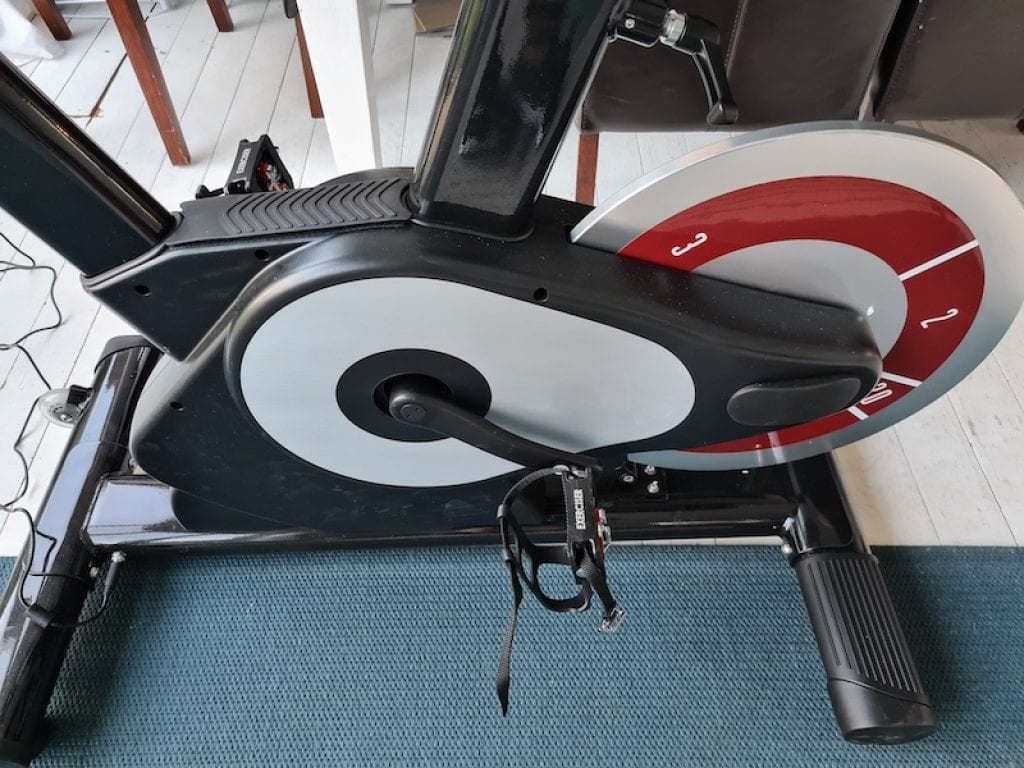 We’d have preferred to see a slightly higher maximum user weight as we believe this bike is perfect for all levels of user and will particularly be of benefit to users who are looking to lose weight and improve their cardiovascular fitness. Although 130kg won’t exclude most users, it may exclude some who would be well suited to this bike.

The flywheel weighs in at 14kg and although it’s not the heaviest it compares favourably and performs incredibly. It is one of the smoothest rides we have used on a spin bike in a long time and ours was a test model that has no doubt been shipped around a fair bit. Impressive stuff!

With a silent poly-V belt driven system, everything under the hood works as well as the outside looks and feels. The pedals are dual sided with toe cages one side and SPD clips the other and everything that you would expect to be adjustable is. The saddle is also extremely comfortable and well made.

Pulse rate sensors are built in to the handles and these are incredibly accurate (they matched our Whoop band heart rate monitors perfectly which astounded us) and the the whole system is bluetooth enabled so you can also use third party heart rate monitors such as Polar or Carol’s own H1 model as well as streaming your own music.

At the time of our review there was no facility for live training sessions but we have it on good authority that this feature is coming soon as well as live streaming and racing content.

The AI controls everything for you so you do not need to worry about settings or resistance or anything like that. It’s all taken care of and explained to you through each workout.

The Carol Bike is easy to use, it really is. Upon first setup you will need to create an account and you can have one for each user in your home. There is no additional cost for this, so unlike other models that require a subscription based model of payment, the Carol actually compares pretty favourably in terms of long term and on-going costs.

Upon first use you will be taken through an initial calibration and there are 6 of these sessions in total. Ours became progressively harder with the first couple of sessions including just two 10 second sprints and the following 4 including two 20 second sprints. This then becomes the norm for your workouts and the baseline for the resistance and torque settings are measured from this initial 6 session calibration and then gets tweaked as your work out over time. 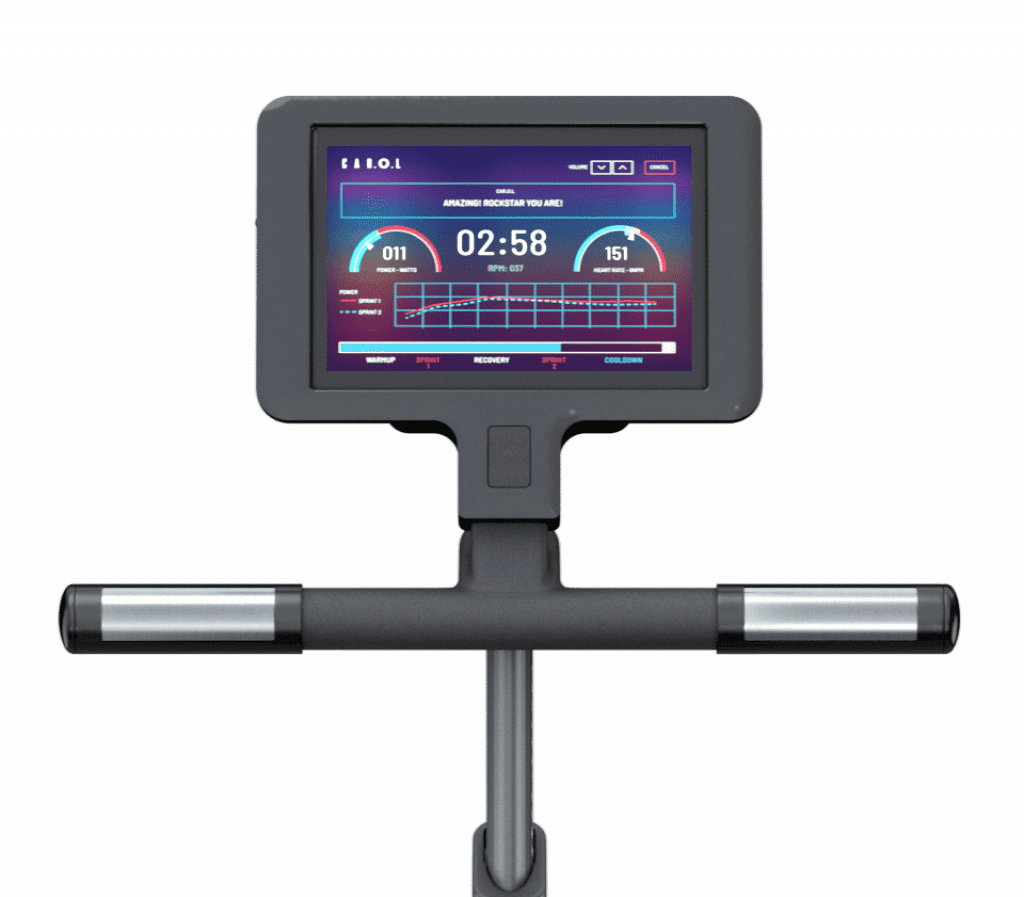 Each session lasts just under 9 minutes and there is a focus on breathing and keeping the pace slow and steady – this was so slow we found it difficult to maintain without wanting to speed up but you get used to it and you start to focus on the quality of the movements and the quality of your breathing rather than the speed.

The display features dials with green and red zones that you have to try and maintain and when it comes time for the sprint you have a few seconds of warning and then bam, you are sprinting away – followed by the increased resistance that is set specifically for you. This is where the science comes in and although we don’t fully understand it, the concept is that it quickly depletes your muscles of glycogen before then focusing on recovery and going again. It also increases your heart rate rapidly and then you focus on bringing that back down too.

The scenarios to choose from at the moment are fairly limited and each has its own music and some include a narrative such as moving through a jungle and then sprinting away from a fierce tiger. This is weirdly motivational and although it can get a little repetitive the music and voice commands are designed to help you to focus on the breathing and ultimately to push you as hard as possible during the 20 second sprint.

You may be thinking 20 seconds is nothing, and although it is when compared to a 30 minute moderately difficult spin session, the 20 seconds feels like a long time when you are pushing to the absolute max for them – and the science backs the method – and ultimately, we noticed improvements over the course of the 4 weeks.

Our resting heart rate was down by an average of 3bpm at the end of the 4 weeks than it was when recorded at the beginning and our tester lost almost 1kg of weight when taking their average weight in week 4 compared to the week before week 1. Weight loss was not a goal for our tester but it did happen all the same with no nutritional changes whatsoever.

It was a pleasurable experience using the Carol exercise bike and although you couldn’t help feeling there was more you could do with it (that may still come through software updates) the reality is that the ‘less than 9 minute’ daily sessions were enough to bring about real positive changes to the health and fitness of our tester. If they continued to use this bike then the it would be interesting to see how the improvements would continue but for a 4 week test there was real significant improvements.

The only real downside to this bike is that it isn’t going to appeal massively to users who enjoy spinning and want to spend more time doing it. There are people like that – believe me!

The Carol exercise bike is a pretty ingenious piece of kit that is likely to really shake up the spin bike market and home cardio options don’t really come any more accessible – with the exception of price. The cost is pretty steep but when you compare it to the likes of the NordicTrack S22i or Peloton – it compares well over a 3 year period.

For users who just want to do their daily exercise as quickly as possible and see results in a super efficient way, then the Carol Bike is perfect. But for those who prefer more from their workouts than just the health benefits this may not be the model for you.

We applaud CAROL for bringing something to market that really shakes things up and we can see it being a big hit with its users.