Home » Info » Effects Of Testosterone On The Body
Info

Effects Of Testosterone On The Body

Testosterone is a key hormone. Both men and women produce it. Men will produce most of it in their testes, with a small amount coming from the adrenal glands, whilst the small amount women produce will be in the ovaries and kidneys.

Men produce testosterone in far larger quantities, and it is far more important to their overall health and wellbeing. Because of this, most of the effects of testosterone on the body will be framed in terms of male biology and health, as will much of my following discussion.

Men typically begin testosterone production as early as seven weeks after conception, though they remain relatively low until puberty. They then rise dramatically during puberty, before stabilising and levelling off around the late teens.

After 30, most men begin to experience a decrease in testosterone year on year. It generally falls by about 1% annually.

The levels of testosterone in a man’s body can make a dramatic difference to their health, affecting everything from their reproductive system and libido to muscle mass and bone density. It can play a significant role in certain behaviours and mental wellbeing.

Most men produce more than enough testosterone. However, many don’t, for various reasons. Hormonal therapy is often advised here as part of a broader medical intervention.

What Does Testosterone Do? 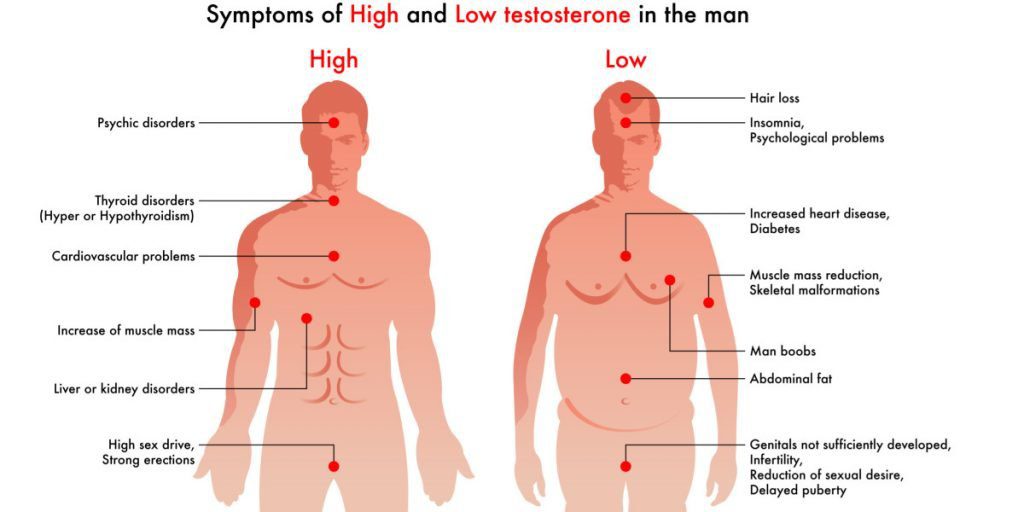 Firstly, before a boy is even born, testosterone sets to work forming male genitals. This happens around seven weeks after conception. Then, during puberty, it is responsible for many of the changes typically seen in boys – it leads to the deeper voice, facial and body hair growth, increased muscle mass and heightened sex drive. This will all happen as testosterone levels rapidly increase during adolescent years, peaking in the late teens or early twenties.

Testosterone levels have a large impact on sexuality. As puberty gets under way and the testicles, penis and bodily hair all begin to grow, so too does sexual desire. Because of this relationship, low levels of testosterone can often present as decreased libido or even erectile dysfunction (ED).

Testosterone can also have a very profound effect on both the central nervous system (CNS) and on a man’s very personality. For example, it plays a large role in certain behaviours and emotions, including anger, aggression, and dominance. It is positively linked to feelings of self-esteem and competitiveness.

Mood can be drastically altered as a part of this. A lack of testosterone can cause issues with concentration levels and drive. It can cause a lack of energy, disturbances to sleep patterns, and depression.

There are some quite clear physical signs of testosterone’s presence within and effect upon the body.

Muscle mass and body composition more broadly are amongst the best known, most visible of effects.

Testosterone is one of the key factors involved in hypertrophy, the creation of new muscle mass, and in building and maintaining muscular strength. It causes neurotransmitters to encourage more growth and interacts with nuclear receptors in DNA, making hypertrophy more likely and more efficient.

Skin and hair are both effected by testosterone. Puberty brings with it body and facial hair, including under the armpits, around the genitals and across the chest, legs, and arms. As testosterone levels shrink, aging men may find themselves losing a little body hair. Both low testosterone levels and hormone replacement therapy can lead to breast enlargement and acne, with skin irritation being quite common.

There are also some less visible, yet equally important, effects to differing testosterone levels. As above, it causes the bone marrow to create red blood cells. Healthy levels may also have a positive effect on the heart, though there have been mixed data on its relationship to things like cholesterol and blood pressure.

There are a few reasons why testosterone levels might drop, and the genetic and environmental factors will always be so tightly entwined that it is hard to separate them.

As above, it’s common to lose testosterone as you age, at a rate of about 1% per year. This can be exacerbated where the genitals have suffered any trauma, such as injury or localised chemotherapy or radiation treatment. There are also several types of drugs that can cause levels to drop, such as steroids, and several diseases and chronic conditions, such as diseases of the pituitary gland.

Given the wide range of things in which testosterone is involved, there is an understandably broad range of common side effects of low testosterone levels. These can include a reduced desire for sex, fewer erections that happen spontaneously, such as during sleep. This can go hand in hand with ED – hormone replacement therapy can be a very workable intervention for ED as a result

Infertility can also be common where there are low levels of testosterone.

There are also some noticeable physical changes that can occur when testosterone production is low. These can include:

Testosterone is one of the key hormones that affects emotion regulation. Therefore, mental health concerns can often be experienced in cases of low testosterone.

There can be some emotional changes with low testosterone levels, with lethargy and fatigue partnering with symptoms of sadness or depression, characterised often by a wider lack of drive or motivation in life. Memory and concentration can suffer, as can feelings of self-esteem and self-confidence.

This can all cause, be compounded by, or result from, things like irritability, decreased sex drive, and fatigue to generally harm self-perception and motivation.

How to Raise Testosterone Levels

There are a number of things that can naturally raise testosterone levels.

As mentioned above, we see a couple of cycles with testosterone levels – with the potential either for being vicious or virtuous. Increasing sexual activity, for instance, can increase testosterone levels, as can regularly engaging in competitive or challenging situations.

Sedentary lifestyles can diminish testosterone production. So too can certain foods, like soya or anything with alcohol in it. Stressful lifestyles (perhaps in which the competitiveness goes to an unhealthy level) can deplete levels.

On the other hand, active lifestyles, with an emphasis on resistance training and absent of too much stress, with a high protein, high fat healthy diet, without too much regular alcohol, can lead to greatly increased testosterone production. Certain drugs, such as steroids, can deplete production, so avoiding these will obviously be very beneficial.

If you want to gain the positive effects of testosterone, then adopting a clean-living lifestyle with plenty of exercise, including resistance training, which offers a low level of stress whilst allowing for regularly challenging yourself, will be the best way to go about it.

Cycling is one of the best forms of exercise going, especially if you can get out and about on an ...

Most of us begin each year full of good intentions. We make new year’s resolutions and hope to ...

Creatine, a compound produced by the body and found naturally in a variety of foods (especially red ...

As an Amazon Associate we earn from qualifying purchases. You will never pay more by clicking our links.
Recent Articles: