The Squat Magic (as seen on TV) claims to aid its users to perform the perfect form for squatting and can be applied to a range of different squat based exercises. This patent pending accessory is said to help you avoid injury whilst helping you to achieve the perfect derrière – our full and unbiased Squat Magic review looks to put this interesting training aid to the test.

Squat Magic – What It Is

The Squat Magic is a device aimed at making the squat a more accessible training exercise for all as it relieves strain that can be placed on the joints whilst performing a free standing squat. This patent pending accessory is aimed at both men and women and can be used by all age ranges. The Squat Magic provides you with a moving seated support on the vertical range of motion found in a standard squat, it also provides a degree of rotation that is designed to help you perform a squat with the perfect form.

As huge advocates of the squat as a great all-round compound exercise, we were intrigued by the Squat Magic as it could allow those who are susceptible to joint pain or lower back pain to be able to perform the exercise pain free. New Image, who are the makers of this product claim that it helps to engage the core, glutes, quads, hamstrings and calf muscles – and in theory there is no reason why it shouldn’t. 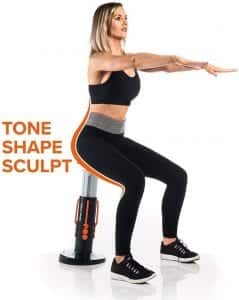 We spent 30 days with the Squat Magic and had it tested by a fairly experienced male weight lifter in his mid 40’s and a beginner female in her mid 20’s. The male lifter had been experiencing some lower back pain when performing squats with a barbell and had taken to performing high rep body weight squats – although was still experiencing some pain in the lower back and had concerns over being able to train this way in the longer term. Our female was fairly new to squats but wanted to really target the glutes by performing squats with the best possible form. She also wanted to train this way every day but just in short bursts of around 5-6 minutes at a time.

The Squat Magic weighs in at around 3.5kg and stands at 68cm in height when in use. For transportation purposes it can be reduced to 50cm in height. There is a large base to the bottom and a seat of sorts to the upper part which provides support whilst performing the squat. The device adjusts to your height and there are three resistance levels to choose from so you can set yourself an appropriate challenge. Each level of resistance will provide you with a little bit more support and both of our testers opted for the lightest resistance in the first instance and performed three sets of 15-25 reps each day for 30 days. Our female stayed on this setting for the duration whilst our male increased the rep range and the resistance level after the first 3 days and found a level that was appropriate for him based on his previous experience and strength.

One important point to make is that the maximum weight that the Squat Magic supports is 17.5 stone (110kg) and there isn’t really the option of adding extra weight to your squat. The lack of being able to perform any kind of progressive overload with this device was a little bit off-putting for our male but after the first week and having performed the squats daily he reported it was a price he was willing to pay for being able to perform the squats pain free. Of course, a squat rack with a loaded bar is going to provide much better opportunity for heavy loads but that is not the intended use for the Squat Magic. Indeed, the supporting nature of the Squat Magic meant there was almost no lower back pain where he had experienced it before.

The main body features a 5 degree tilt which allows for greater flexibility and provides you with the sensation of you performing more of a free standing squat than having the extra support. The limit of 5 degrees does however seem to help guide you to having the correct form which means you are getting optimal results from a more efficient workout. Again, we found that this could well negate the issue of not being able to load up extra weight and for those seeking more of a metabolic workout this would seem ideal.

Along with the main apparatus you will also receive a detailed instructional booklet, a nutritional guide, an exercise wall chart and a 30 day challenge wall chart. With over 15 variations of the squat to choose from, there is something there for beginners right through to advanced users and the Squat Magic itself takes a lot of the tension away from the areas that can cause pain or long term joint problems.

Both of our testers enjoyed using the Squat Magic and both said they would continue to use it as part of a long term training plan. Both used it in their own homes although both do attend a full gym set up. Our female user expressed that she saw a noticeable improvement to the visible appearance of her glutes and thighs after the 30 day period whilst our male user stated that he was pleased to be able to perform squats again without having to experience any back pain.

Having looked at some of the online reviews from other users it seems there may have been issues for some whilst many were over the moon with this product. It does appear that the manufacturer has dealt with any product faults that might have developed but as all of them come with a 12 month warranty there shouldn’t be much to worry about on that front. Both of the products we used were fully functional and showed no signs of degradation after 30 days of intensive use.

If you are looking to achieve a stronger and more toned core, bum and legs then the Squat Magic is a very good choice to be able to perform the exercises as pain free as possible.