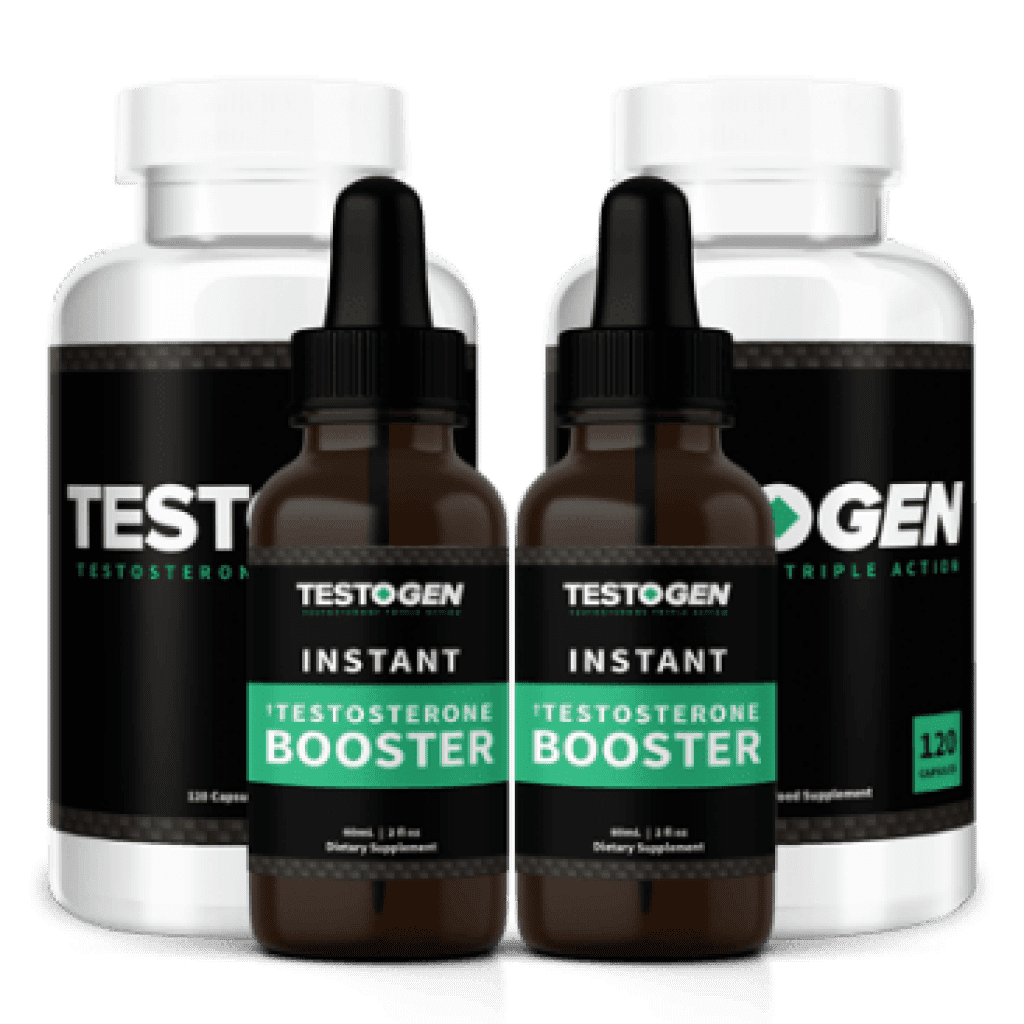 Have you had that nagging thought in the back of your mind about having potentially low testosterone levels? If you are experiencing low energy levels, lack of strength progression when working out regularly or a lower than normal libido then there is every chance you could be low on testosterone.

If you are the wrong side of 30 then it is even more likely that your testosterone levels are on the decline – and that is perfectly natural.

Rather than wallow in self pity and complain about your lack of gains in the gym or your lack of appetite in the bedroom, there is an affordable solution that promises to bring your testosterone levels back and your flagging libido and energy levels up with it. Testogen is a natural testosterone supplement that is available in capsule and drop form and is designed to increase the testosterone in your system.

Testogen is a lot cheaper than traditional Testosterone Replacement Therapy (TRT) and on the face of it looks like a very viable solution to a very real problem many of us face. We thought we’d get the full scoop and so decided to bring you our full Testogen review.

Before we get in to the full Testogen review it is worth reminding ourselves of the benefits having higher levels of testosterone will bring. It is also worth considering why we might need testosterone supplementation in the first place.

First of all, both men and women can benefit from higher levels of testosterone and although women naturally have much less in their system they too will benefit from supplementation. It is widely acknowledged that male testosterone levels peak at the age of around 20 years old and they then continue to decline year on year.

A typical 20 year old male might expect to have levels around 900Ng/dL whereas males at age 40 will have an average of less than 600Ng/dL. By 50 this declines further to levels of less than 400Ng/dL – less than half of that of our 20 year old former selves.

Most people will not need any kind of testosterone supplementation under the age of 25 but after this point there is a very strong argument for using supplements such as Testogen. At age 35+ the improvements you could see can be even more impressive. 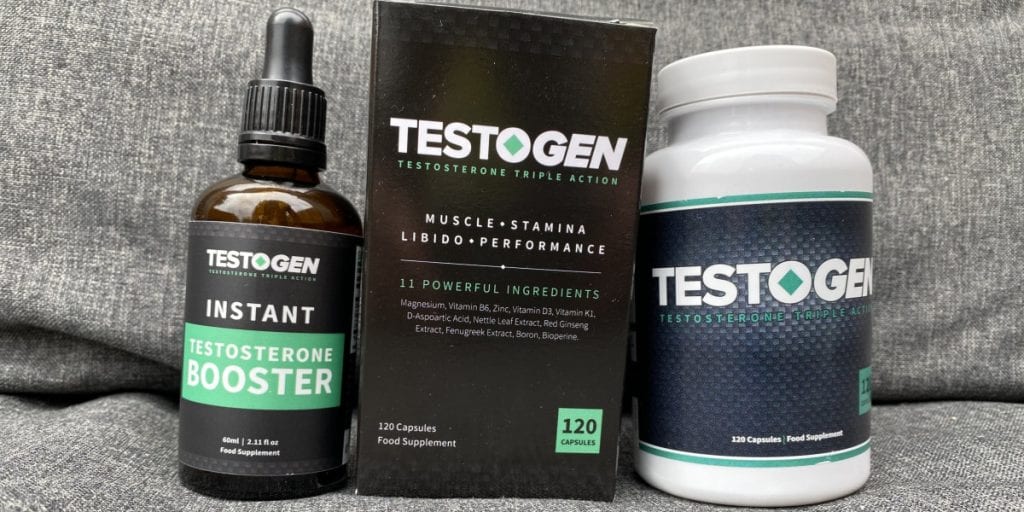 It’s important to note that this is not a medically backed Testogen review and we don’t have official figures to provide for our own testing although we have referenced some medical studies which we have linked out to. We do however have our own anecdotal evidence following 60 days testing Testogen capsules and the quick acting testosterone drops.

We have seen a number of testosterone supplements over the years and all have made bold claims about the impact of taking them. However, there was something different about Testogen right from the off so we were actually pretty pumped to be testing them out.

Our tester was a 41 year old male who was working out 4 times per week in the gym following an upper body, lower body, push, pull split and who also plays racket sports once per week. Our tester has not been officially tested for testosterone levels at any point but it is fair to assume that levels are declining as a result of natural ageing.

What Is In Testogen?

One of the reasons we loved the look of Testogen is that it has a blend of natural ingredients. It doesn’t promise to pump you full of testosterone (for one that could be potentially dangerous and side effect inducing) but instead using these natural ingredients to promote the creation of more testosterone naturally in the body.

The concept behind this product is that this blend of ingredients works together to naturally promote the creation of more testosterone whilst also reducing estrogen levels in men. 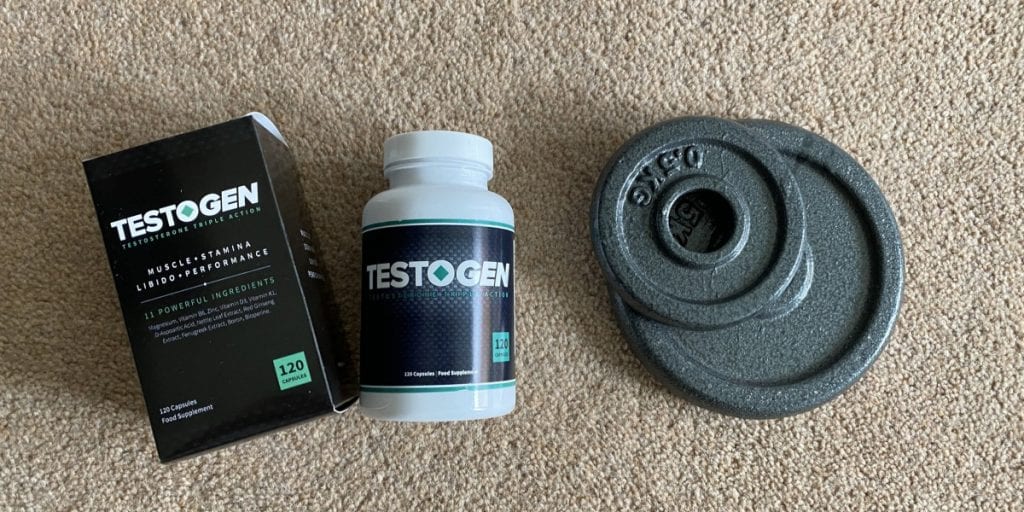 We predominantly tested the Testogen capsules but did also try the mouth drops too. The drops are supposed to provide an almost instant boost in testosterone and have a slightly different set of ingredients (all of which are still natural). As directed by the manufacturer, our tester took 4 capsules per day (the recommended serving size) before breakfast and took them every day. You are supposed to take them on training and non-training days so you get a consistent benefit over time and this makes perfect sense as the benefits of increased testosterone are not limited to just muscle building gains.

[wpsm_quote author=”Brilla and Conte Study – 2000″ float=”left” width=”34%”]increase in strength of almost 50% of football players who took a testosterone increasing supplement compared to football players who took a placebo[/wpsm_quote]Testogen ship worldwide and they have a range of offers on their website. The more you order the greater the savings but we opted for the Testogen Combo package which included a 3 month supply and the drops. It’s not what we would call a cheap testosterone supplement but when you consider the ingredients, it packs a pretty big punch just as a multi-vitamin which is essentially what Testogen is. The amount of each ingredient per capsule is also giving you a pretty big boost to any of those deficiencies you might have so you can be sure you are doing your best to give your body the best chance of increasing the production of testosterone.

As a supplement that is supposed to be taken continuously we were very aware that we might only see minimal or even no impact in the first month we tested the product but that wasn’t the case. After just 6 days of taking the 4 capsules per day and also testing the mouth drops just prior to a workout our tester reported a significant uptick in his performance in the gym. Now it could be that there was some form of placebo effect taking place but this improvement continued in to the second, third and fourth weeks of taking the supplements and over this period there was a significant improvement in compound and isolation lifts as well as match winning tennis performances.

Studies would appear to back this up with a 2000 study by Brilla and Conte reporting an increase in strength of almost 50% of football players who took a testosterone increasing supplement compared to football players who took a placebo. In fact, the players who took the placebo and trained just as hard as those who did take the real supplement were found to have shown a decrease in testosterone levels of over 10%. This means that increasing training volume without the right nutrients could lead to a testosterone decrease – making the case for a product like Testogen even more compelling if you work out and push yourself to the max.

Either way, we found there was a noticeable improvement in weight training performance when taking Testogen alongside a balanced nutritional plan that had 40% carbs, 30% protein and 30% healthy fats.

The benefits didn’t stop there either.

After 3 weeks there was a notable difference in mood, concentration and focus and the improvements in libido were also noticeable. It could be that the libido improvement was a combination of the Testogen benefits seen in the gym as well as the direct impact of the ingredients designed to improve sexual performance but our tester reported a significant improvement in desire and stamina.

Our first impressions are that Testogen works. We did not measure actual testosterone levels (as this is actually incredibly difficult and problematic to do) but whether it is increasing actual testosterone production or some other side benefit of taking this combination of ingredients, it seems to work.

So let’s take a look at why these 100% natural ingredients could be so effective:

Vitamin D3 – The benefits of Vitamin D are widely known but a study by Pilz et al in 2011 conducted a controlled test where 165 participants either took a placebo or a Vitamin D supplement. Those who took the supplement showed vast increases in testosterone compared to those who didn’t – in fact, those who didn’t pretty much stayed at the same levels whereas those who did showed an increase of 25%.

Zinc, Magnesium & Vitamin B6 – Why have we lumped these three together you might ask? Well these three ingredients are considered to be the holy grail when it comes to aiding the body in production of testosterone and there are numerous studies to back this up. The Brilla and Conte study that we mentioned earlier took ZMA (Zinc, Magnesium and Vitamin B6) and found that it increased testosterone levels by 32.44% for those who took ZMA daily. As with many of these studies the sample sizes are limited but the results are pretty conclusive and hard to ignore. These three nutrients all have their own unique benefits too which range from aiding your quality of sleep to improving a wide range of bodily functions.

Bioperine – Derived from black pepper extract, this ingredient is added as it helps the body access all of the other ingredients more readily.

Vitamin K1 – Here as a the wingman for Vitamin D. By including Vitamin K1 in Testogen the body can absorb the Vitamin D much more efficiently and effectively which could lead to greater testosterone production.

D-Aspartic Acid – Testogen is packed full of this stuff and for good reason. There are studies that suggest D-Aspartic Acid can help increase testosterone by as much as 45% in just a few weeks. Testogen has a higher concentration of this amino acid than any other natural testosterone booster on the market.

Nettle Leaf Extract – We won’t go in to all the details on this one but essentially the nettle leaf binds to your sex hormone binding globulin (SHBG) which allows the rest of the testosterone to distribute through your bloodstream and aid you in more productive ways such as building lean muscle mass.

Our Verdict On Testogen

Testogen certainly made a significant impact on our tester. So much so that he has vowed to continue taking it for at least the next 6 months to see if the improvements in concentration, strength, muscle mass and fat loss continue. At the very least, Testogen is an excellent multi vitamin supplement and at best it could perhaps be the best way to increase testosterone in the body using natural ingredients.

Testogen is a fairly significant investment but we would say it is one worth taking if you are suffering from lack of muscle growth, lack of energy, concerns over sex or your libido or lacking focus and concentration. If you are suffering from two or more of these issues then the results could potentially be truly life-changing if you experience the same as what our tester did.

Testogen Reviews – Before & After Pictures

We have scoured the internet and asked our readers to send in their reviews and before and after pics showing the results of using Testogen. The reviews are all incredibly positive and the before and after images are inspirational.

Take a look at some of the before and after images here: 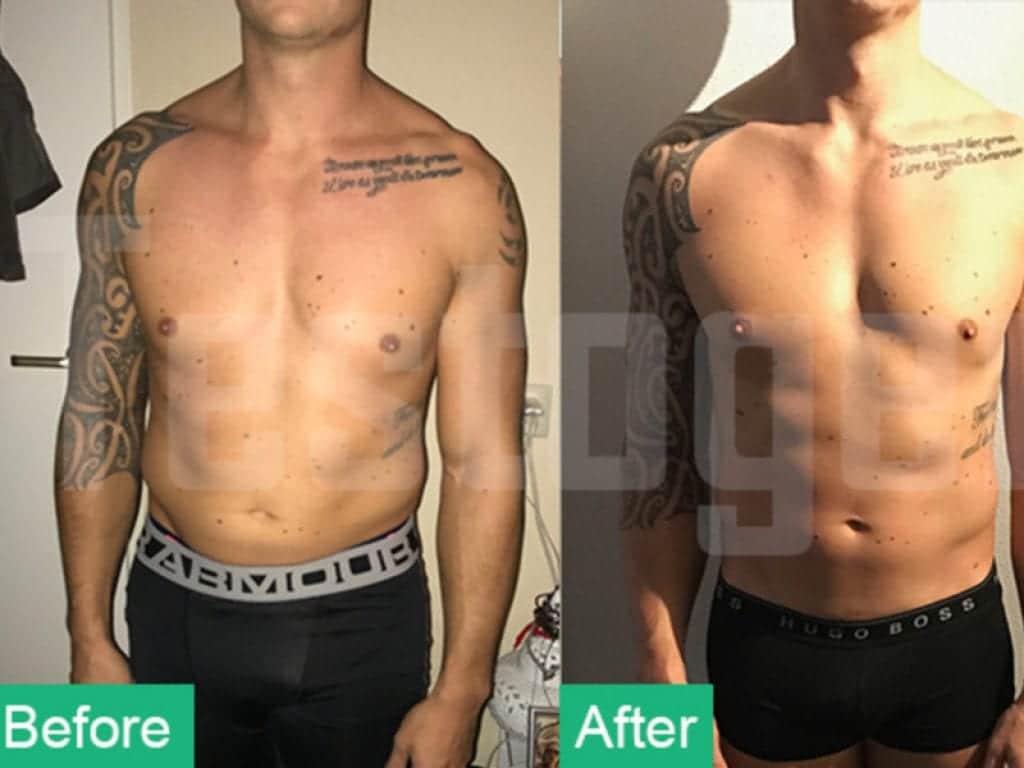 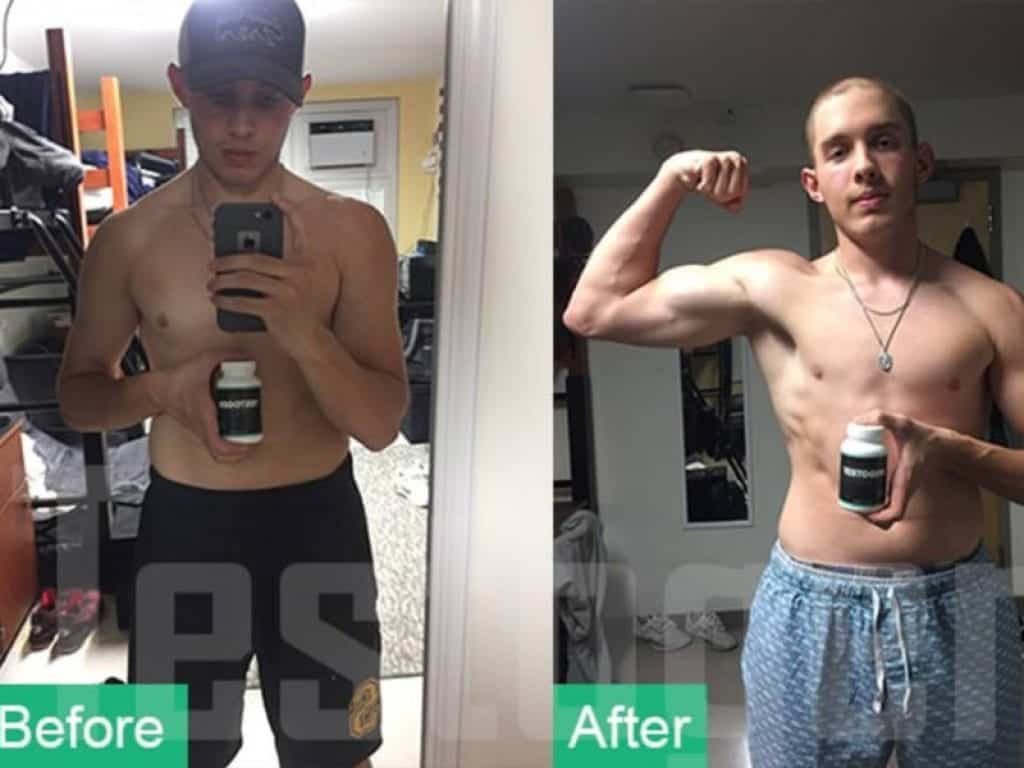 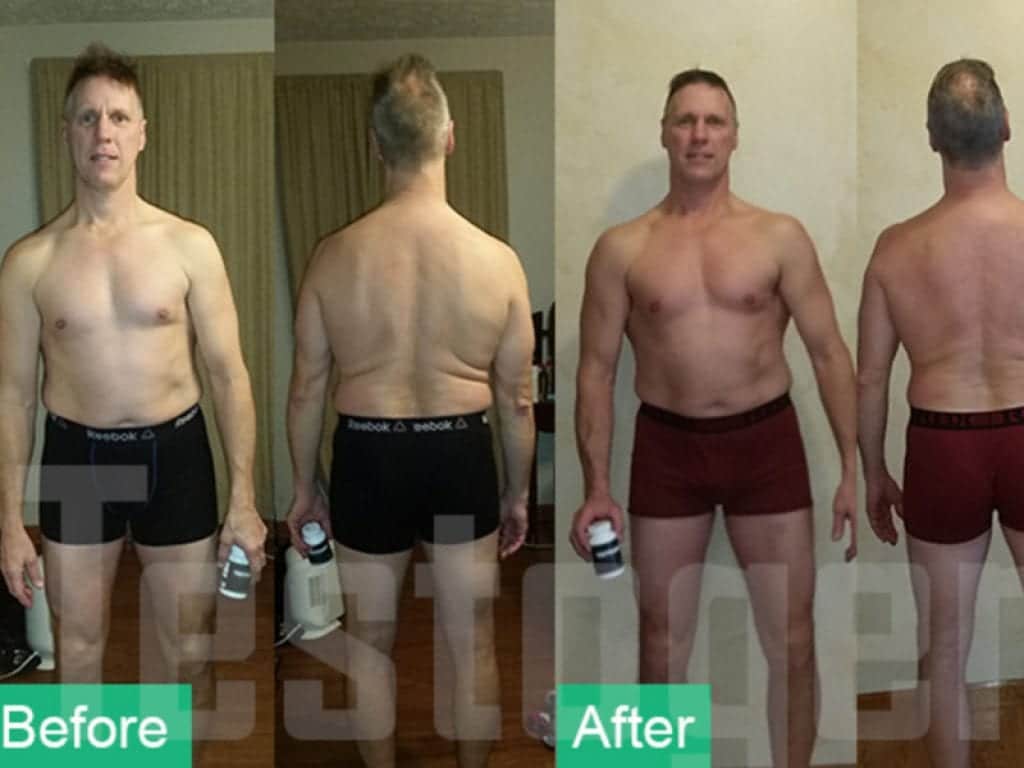 Top Reasons To Use Testogen

If you aren’t convinced yet as to the benefits of Testogen, here are our top reasons to improve your testosterone levels and to do so using Testogen:

Ultimately, Testogen is going to leave you feeling more confident in yourself, become more appealing to the opposite sex and have you performing at your physical and mental peak in social and work life circles. If you are considering buying Testogen then be sure to check our link below for the latest offers and claim your free bottles.