The Assault AirBike is considered by many to be one of the highest quality air bikes available for home use today. Designed and manufactured by California based Assault Fitness, the classic AirBike is surprisingly affordable and has some top of the range specifications to match. We decided to give it the full Fitness Brain testing and so here we are to bring you our Assault AirBike review.

The Assault AirBike goes one step further than a standard exercise bike in that it also features two moveable arms which allow you to undertake an upper body workout in addition to just working the legs. This bike will appeal to anyone looking to purchase a home based machine that will provide a stern cardiovascular test as well as providing some strength training benefits. It is also perfectly adequate for commercial settings.

Air bikes use large fans to create resistance and this model from Assault Fitness is no different in that respect. The one key difference that sets the Assault AirBike Classic aside from other manufacturer models is the size of the fan – measuring up at an impressive 25 inches the AirBike Classic is capable of creating infinite levels of resistance and does so with a smooth and fluid ride. From assembling the AirBike to taking our first ride, it was pretty clear from the outset that we were going to be pretty impressed with it – so let’s take a look at the key specs. 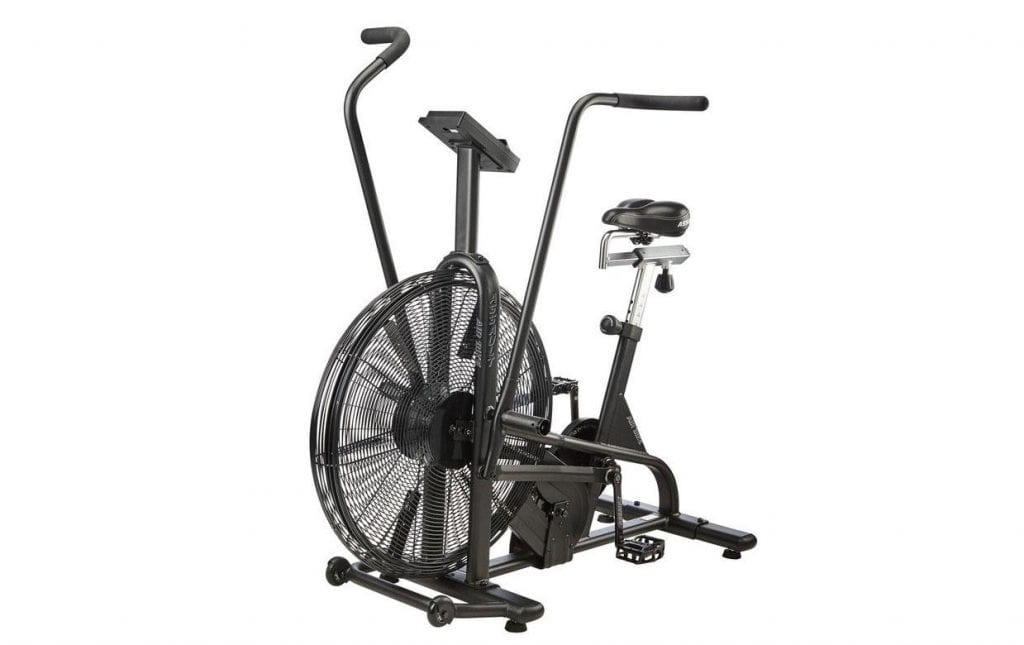 The AirBike arrives unassembled in a large branded box. Sometimes when we open boxes like these we are filled with dread at the thought of spending hours assembling something that is going to have less stability than a house of cards – thankfully there should be no such concerns with the Assault Air Bike as it is mostly pre-assembled with just some minor assembly required that any competent DIY-er will blast through in less than 15 minutes. The results are an exercise bike that is incredibly stable and that looks simply stunning (if not a little intimidating).

The high quality steel frame is built from only the finest materials and this bike oozes quality from every element. Built to a commercial standard, everything from the frame to the seat tubing is made from high quality steel – even the pedals are made of metal. It has a maximum user weight of 136kg and the bike itself weighs in at just under 44.5kg. It has built in transport wheels which make it easy to manoeuvre in to a different position which again makes it an ideal choice for the home gym or a commercial setup.

The saddle is classed as a ‘sports seat’ and is incredibly comfortable and can be adjusted in terms of height but also in terms of distance away from the handle bars which makes for a superior ride from a comfort point of view – this additional adjustment makes such a difference compared to cheaper variants and for anyone who is at either end of the height spectrum this adjustment will really help.

The Assault AirBike comes with a 5 year frame warranty and 2 year warranty on non-wear parts and the likelihood is that this exercise bike will last for years and years to come thanks to its excellent build quality.

Assault Fitness advertise the Assault AirBike as being something you will love and hate – and never have we thought a marketing line was so apt! The AirBike truly is a thing of beauty. It has attitude in abundance with its sleek black lines and the oversized fan almost staring at you saying ‘go on then, if you think you’re hard enough’.

The truth is, this is an exercise bike that will put you through your paces without it even breaking a sweat – you on the other hand will certainly be sweating after anything more than 10 minutes training. There is a reason why the US military use these Assault AirBikes and it isn’t just because of their mean looks.

The square-taper designed drive train affords a smooth ride but also one of increasing difficulty the more effort you put in. It is hard to imagine anyone is capable of pushing this bike to its true limit and we certainly didn’t come close. Unlike exercise bikes that use magnetic resistance, the resistance that an air bike produces is through the air resistance of the fan. As you pedal, push and pull the AirBike the more the resistance increases and thus you end up with a really refined system for creating almost infinite levels of true challenge. 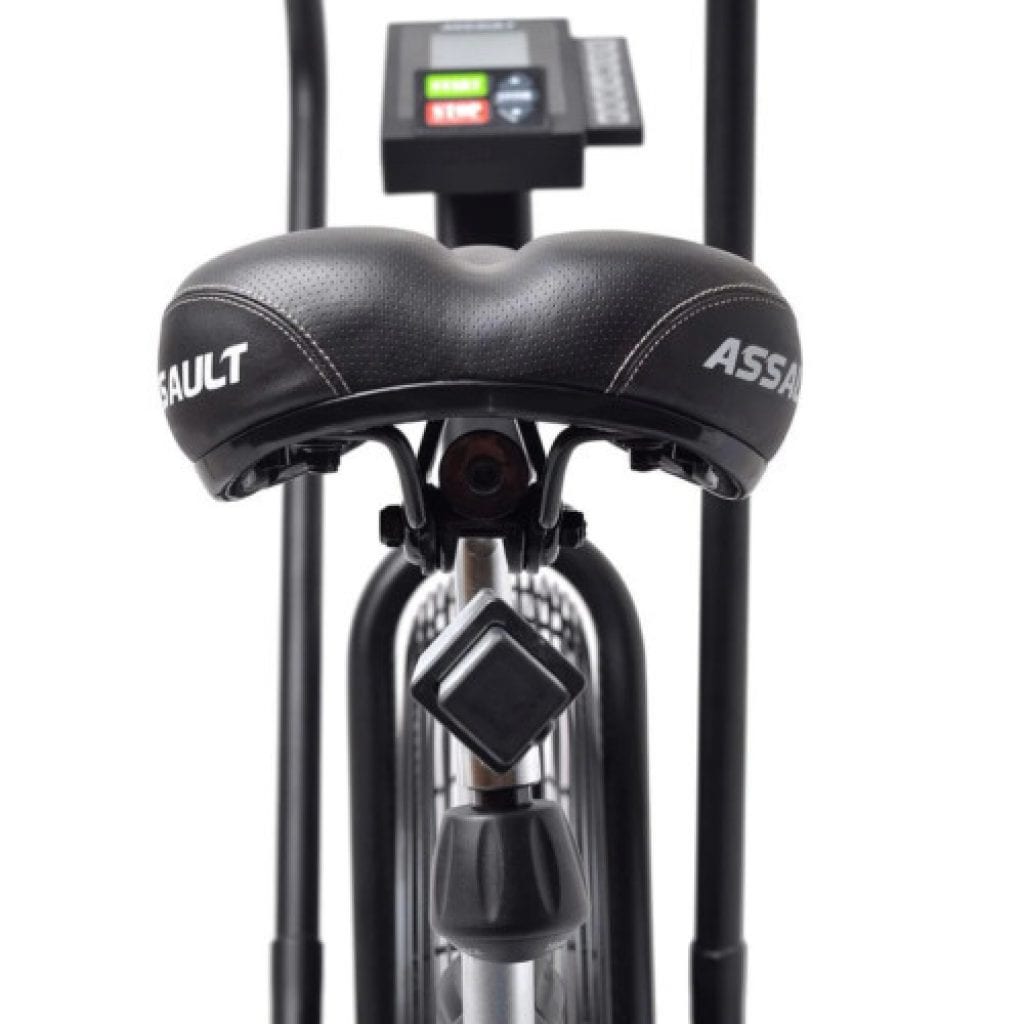 The saddle is very comfortable and the various adjustments you can make to the seat position mean you can find an optimum position for your body. The pedals are also made to an exceptionally high standard and are more akin to actual bike pedals than those you would usually find on an exercise bike. In fact, there are no annoying feet straps to keep your feet in place because quite frankly they are not required due to the quality of the pedals.

The versatility of this AirBike will also appeal to many users as you can choose whether to use the bike as ‘just’ a bike, use a combination of upper and lower body or even just use your upper body with the moving arms while resting your feet on the stationary foot bars to the bottom of the arms. All three options give you a solid cardio workout but it is handy to be able to isolate different body parts if you need to give those muscles a rest because of your strength training regime or other exertions.

There is a high contrast LCD monitor on the conveniently located centre console that displays all of your key stats so you can track your progress during your ride. There is no app or bluetooth connectivity with this model but you can track your heart rate if you have a Polar heart rate monitor. The console offers a range of pre-set training sessions that are as gruelling as you might expect and the console is easy to navigate and control even mid-ride.

Despite the AirBike giving a really tough ride we absolutely loved the design and ride quality that it affords – and at the price it is worth every penny. The only real downside to this piece of equipment is that it isn’t foldable but it is hard to imagine how this air bike could function as well if it were able to be folded.

The Assault AirBike is certainly our new favourite thing to love and hate. We love its high quality build, various seat adjustments and the quality of ride it offers. We hate how we know we will never defeat it as it is just so much stronger than we are – but in reality, that is just another thing we love.

You will never outgrow the Assault AirBike and the fact that you can opt for upper, lower or upper and lower body workouts is an added bonus. It has a good range of pre-set programmes and all things considered is worthy of being known as best in class for air bikes.

You will not be disappointed in this purchase and with a 5 year warranty there is plenty of peace of mind on offer.